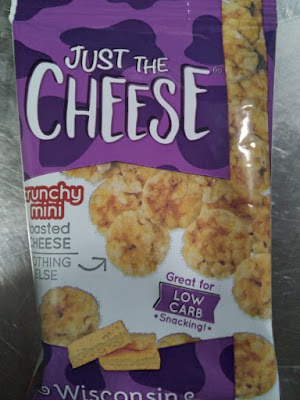 I first noticed this item at one of our local grocery stores a couple months ago, near the dairy section. It looked interesting but I always found an excuse not to give them a try. However, I was waiting for someone to pick out a gallon of milk yesterday evening (something that apparently required some serious thought on their behalf) and, since these were only 79 cents, I picked up a couple packs of them.

I decided to try the Wisconsin Cheddar variety as a snack last night and, as much as I wanted to like this item, I found I really didn't.

I will admit, it is an intriguing idea and the whole "low carb" thing would be appealing to several people I know. It's just I didn't enjoy the flavor as much as I thought I would.

I could taste the Wisconsin cheddar, as promised, but the snacks left a dry aftertaste in my mouth, leaving me feeling more thirsty than satisfied.

To be fair, this might have just been a matter of personal preference. Cheddar cheese tends to have a variety of flavors and I've never been a huge fan of sharp cheddar, which I think might have been what was used with these snacks. So, while I didn't enjoy this particular one all that much, I am willing to try another variety before making a decision on the entire product line.