Book Review: The Case of the One-Eyed Witness by Erle Stanley Gardner (1950)

Synopsis: When Perry Mason receives a phone call and cash retainer from an unknown woman, he must figure out who his client is and why she needs his services. He ultimately winds up defending Myrtle Fargo, who is accused of murdering her husband. She both denies being the one who called Mason and being behind her husband's death but there is an unshakeable witness that refutes Myrtle's alibi. 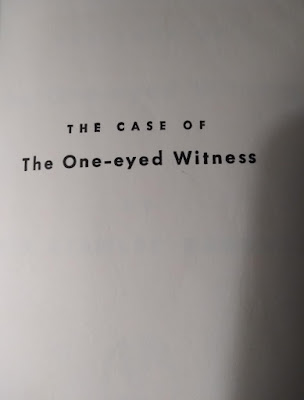 Review: Since I continued to have the house to myself this afternoon, I was finally able to finish this Perry Mason novel while waiting for my family to get home from shopping. When I first started reading this book I wasn't really sure if I would like it. However, it turned out to be a fairly decent mystery.

I think the thing that made this mystery so intriguing was the fact his client was obviously avoiding telling him everything that happened the day her husband was murdered. That, along with the witness testimony, made her look guilty enough for Mason himself to believe she did, in fact, kill her husband and, even though she kept denying it, was seeking to prove she did it in self defense.

Not helping him was the fact Detective Tragg always seemed to be one step ahead of him throughout the book. I found I actually enjoyed that, because it always makes things more interesting when a protagonist has someone that is nearly equal in terms of their detective skills and, admittedly, while Tragg ultimately had some of his facts wrong, it was easy to see how he reached some of his conclusions, including accusing Mason of tampering with evidence.

The witness, Mrs. Maynard, was also a nice wildcard. Based on her testimony, it was hard to tell if she was telling the truth, was lying because she was somehow involved or was just someone who was horribly mistaken about what she saw. I especially loved how Mason thought he gained the upper hand by addressing her need to wear eyeglasses only to find out, in court, his assumption wasn't even remotely correct and the truth only hurt his witness. As a result, I did wonder just how he planned on getting his uncooperative client acquitted, especially since she was still claiming she wasn't the one who hired him.

Final Opinion: It starts out a little slow but, overall, winds up being an entertaining murder mystery. I found I enjoyed it and I would recommend taking the time to read it.