Book Review: The Case of the Crying Swallow by Erle Stanley Gardner (1947)

Synopsis: When Major Claude Winnett's new bride, Marcia, goes missing, he hires Perry Mason to help find her. Suspecting the disappearance has something to do with the theft of jewelry around the same time, Mason investigates and eventually discovers a murder scene involving Marcia's blackmailing ex-husband. 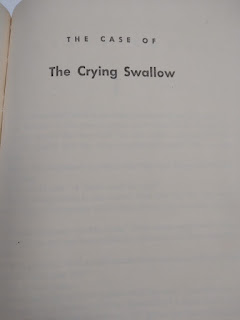 I actually don't have any real issue with the case itself. I actually enjoyed that part of it. There was a missing wife who apparently had some sort of sordid past and, more importantly, missing jewelry that the husband seemed not to think was important even though the theft and disappearance happened at right around the same time. It made me wonder if he was hiding something.

When Mason eventually finds the body, it only makes the case that much more interesting because the list of suspects seemed to be limited to Marcia and Major Winnett. The fact the former was willing to confess only added to the mystery.

I think the main problem with this book is it is just too short. It was an intriguing case, but Perry Mason had too easy of a time solving it. Heck, he even found the missing jewelry in a matter of a couple chapters. I'm not a big fan of unnecessary filler, but this book could have used a little more substance, even if it was adding a bit more depth to some of the characters and/or having him battle it out with the police and district attorney's office.

Final Opinion: It's actually an OK mystery. I just think it would have been better if there was a little more added to it and it wasn't so easy for Perry Mason to solve.