Book Review: The Case of the Crimson Kiss by Erle Stanley Gardner (1948)

Synopsis: Secretly jealous of her soon-to-be-married roommate, Fay, Anita Bonsal is forced to settle for a business-like relationship with the married Carver Clements. When she finds Carter dead on the floor of his apartment with a crimson lipstick mark on his forehead, Anita decides to frame Fay for murder. She is successful, but didn't realize Fay's aunt is friends with Perry Mason's secretary, Della Street. 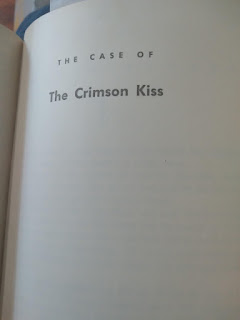 Review: When I checked out The Case of the Cautious Coqueutte a couple weeks ago, I didn't realize this book was a throw-in under the same cover. After discovering it, I was quick to find time to read it. After doing so, I can understand why it wasn't even listed on the cover of the book.

On the surface, I think this has the potential to be a good murder mystery. The problem, however, is Erle Stanley Gardner just reveals too much information right off the bat.

The best Perry Mason mysteries, in my opinion at least, are the ones where you don't know if his client is innocent or guilty. That uncertainty adds a little extra something to his case, partly because you don't know when his client is telling him the truth about certain facts in the case (often leading to surprise evidence).

Had this book done that, rather than tell the reader Anita was framing her roommate, I think it would have been considerably better.  Instead, since I already knew the truth, it was actually kind of dull. Heck, the book didn't even bother to spend a great deal of time describing his client. All I really knew about her was she was attractive, engaged and had a roommate who was a backstabbing bitch.

There wasn't even much courtroom suspense. I correctly predicted how Mason would prove his client was innocent and, once that did happen, relatively early on, it pretty much wiped out the case against her. In all honesty, compared to what I'm used to reading from this author, this book had a "first draft" feel to it.

Final Opinion: It's not necessarily a bad book and, in a pinch, does make for a quick read. I just feel, when graded on a curve, it doesn't live up to the standards set by other books from this author.