Synopsis: Starting with the discovery of Pompeii, this non-fiction book tells about the people behind historic discoveries and the invention of modern day archaeology. 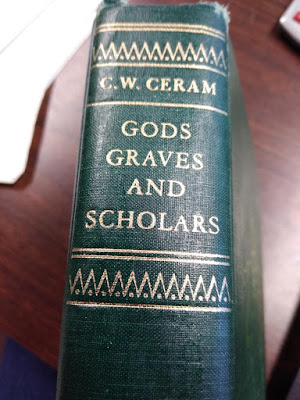 Review: I've been trying to check out something educational whenever I make a visit to our local library and, as I was walking through the non-fiction section, this book happened to catch my eye. I gave it a read and it turned out to be an interesting book.

I think the thing I liked best about this book is the way it doesn't just talk about important discoveries, like Pompeii and the Rosetta Stone; it also gives some intriguing detail about the people responsible for those discoveries. As a result of this, I learned a lot.

I think the part I enjoyed most was the section regarding Egypt and Napoleon's failed expedition. While it was a military failure, but without it, we may not know nearly as much about Egyptian history as we do today.

I also loved the story about Champollion, the man who used the Rosetta Stone to decipher Egyptian hieroglyphics. Not only did the book reveal the effort wasn't an overnight thing, even with the help of the stone, the man responsible for cracking the code could have just as easily been executed as an anti-Napoleon traitor.

Equally intriguing was the book's description of Cortes and his "unparalleled" way he "beheaded" a culture. I knew bits and pieces of his conquests but the book does a good job of filling in details, including how he alienated his followers by dividing up the gold he stole. This is the type of stuff they just don't teach enough in school.

Final Opinion: It's obviously an older book and may not include information about more recent discoveries. But, it does a decent job of bringing to life the people who are responsible for creating an interest in archaeology as well as those who hindered the efforts.