Synopsis: When she enters her home, it takes Army intelligence officer Amy Cornwall thirty seconds to realize her husband and daughter are missing. A single phone call from their kidnapper delivers an ultimatum, free an unknown prisoner from military custody in the next 48 hours or her family will be killed. 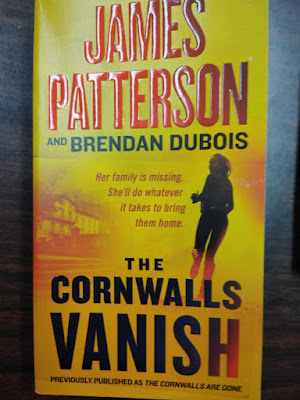 Review: I've never been interested in reading James Patterson. However, my daughter recently purchased this book for me as a birthday gift and that prompted me to give it a try. While I still wouldn't quite classify it as a genre I'd be interested in reading on a regular basis, I will say I enjoyed the book more than I was expecting to.

Amy Cornwall is an intriguing character. Her husband and daughter were in danger and I could sense genuine concern from her but, at the same time, she managed to treat the situation with a somewhat unemotional approach, finding clues from neighbors and the local service station security cameras before ditching the burner phone the kidnappers gave her so she could go off grid and be in control of the situation. Basically, she is a mom you don't want to mess with.

The book also does a great job of humanizing the people she is trying to rescue. That part in the book about her daughter being upset because the kidnappers were preventing her from taking care of the school's hamster was downright heart breaking. If nothing else, it reminded me just how much emotional baggage her mom was having to deal with while trying to save her.

One thing I am undecided about when it comes to this book was the decision to alternate between a first-person perspective whenever the story focused on Amy and a third person perspective when talking about her family and the kidnappers. I didn't necessarily hate it because the third person parts filled in the tiny details (like the daughter and the hamster) that might have been missed had it solely focused on Amy. But, at the same time, it also reduced some of the mystery. I think it might have been slightly better had the book stayed in first person but shifted between Amy and her husband.

I also felt as though the story had a bit of a sequel feel to it, as though I was already supposed to know who Amy Cornwall was when I started reading it. In fact, I actually had to check to make sure there wasn't supposed to be a book before this one. In the end, it wasn't a huge deal because the book does fill in the details later. But it was confusing at first.

Final Opinion: Again, it's not my first choice for genre, but it was a decent read and I did enjoy the book. I'd recommend reading it if you get a chance.