Book Review: The Case of the Dubious Bridegroom by Erle Stanley Gardner (1949)

Synopsis: The first time Perry Mason meets Virginia Colfax, she is climbing down the fire escape leading to the Garvin Mining, Exploration and Development Company one floor above his office and he is certain she was carrying a gun. When that gun is later used to murder Ethel Garvin, Mason must defend her husband, Edward, against the charges. 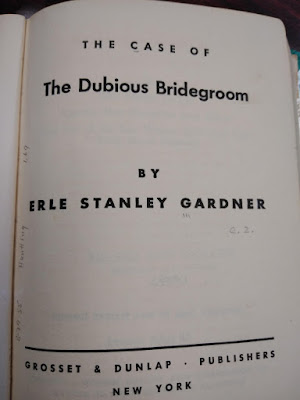 Review: I had some free time on Sunday and was able to plod through the rest of this book, which I started a few days earlier. Unfortunately, while I've enjoyed most Perry Mason books lately, this one fell a little short of expectations.

On the surface, the book does have an intriguing plot. Even though the actual evidence against him is limited at best, Mason's client, Edward Garvin, does seem like the most obvious suspect, both because his estranged wife seemed to be making an effort to take over his business and because she was accusing him of bigamy after confusion regarding their divorce.

My biggest problem with the book is it winds up being a bit too predictable. For example, the second Garvin decided to hold onto his car keys rather than check them in at the hotel Mason found for him, I knew it was only a matter of time before the book revealed a secret car trip. I also correctly suspected the alibi given by another possible suspect was fabricated, despite having an eye witness. This, in turn, made it easy to figure out who the killer was.

Another disappointing part of the book was the anti-climatic way Mason handled a grievance filed with the Bar Association. Instead of being able to read about him successfully defending himself with a surprise piece of evidence or interpretation of the law, the book lets him clear his name relatively quickly and resolve the entire issue with a phone call. It just seemed like a waste of one of the most intriguing things about this case.

Final Opinion: I think this murder mystery had potential, but it just fell short of the standard set by other Perry Mason novels. It is among my least favorites as a result.