Book Review: The Pleasure of My Company by Steve Martin (2003)

Synopsis: Daniel Pecan Cambridge is an ordinary American, except for the fact he is afraid of 8-inch-high curbs, can't hold a job because of a counting obsession, secretly drugs is upstairs neighbor, is romantically obsessed with a local realtor he has never spoken to, needs to have a grand sum of 1125 watts of light in his apartment and was once a suspect in a murder. 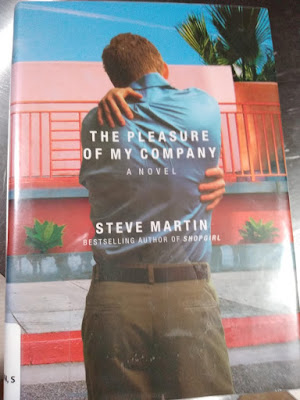 Review: I ended up checking out this book from our local library a couple days ago mostly because I am a big Steve Martin fan and, until recently, had completely forgotten he had written books. I didn't really know what to expect from this particular novel, but, after finishing it, I have to say I enjoyed every page.

I think the thing that really drew me in when reading this book was I didn't quite know what it was going to be about. It's a first-person account from Daniel's perspective and, as a result of that, a lot of the pages are nothing more than him rambling a bit and not seeming to have much of a point. At the same time, the book seemed to be leading up to something. I just didn't know if that thing would turn out to be a love story or if he would eventually confess to being a murderer.

The stories he tells are also fairly amusing. This includes having a romantic encounter interrupted by his lightbulb obsession and him winning an essay contest he entered (twice) solely so he could covertly watch an attractive pharmacist at the local Rite Aid. They gave the book just the right amount of comedy while, at the same time, made Daniel seem like he could potentially become dangerous at any given moment.

I don't want to ruin the surprise by giving away too many more details, but the ending was something I was not expecting, especially since the book seemed to be leaning a completely different direction just prior to it happening. Basically, Steve Martin threw in a nice red herring that had me fooled about how the book would end up until the last few pages. I loved it.

Final Opinion: It's a somewhat unusual book and, as you're reading it, you probably will start to wonder if there is a point to Daniel's story. I do, however, recommend taking the time to read it because I know I enjoyed it.