Synopsis: Getting his start in burlesque, Lou Costello quickly rose to world-wide fame by partnering with Bud Abbott to form Abbott & Costello. However, his personal life was plagued by tragedy, financial issues and health problems. 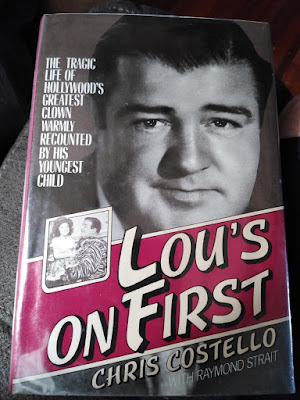 Review: I came across this book at the library last week and, being a big Abbott & Costello fan, I decided to check it out.

Since the book was written by his daughter, with the help of Raymond Strait, I did have some concerns about the book being a bit too slanted. But, after reading it, I did find it was an interesting well-balanced account of a man who was talented and had a big heart, especially when it came to his family but, at the same time, had his flaws too.

I think the thing that really surprised me about this book was the way it managed to create a wide range of emotions while I was reading it. Some of the stories were humorous, such as the stories about him sneaking off with movie props while the films were still being made and letting the studio "borrow them" so they could finish filming. In contrast, other stories, such as the death of his only son and the aftermath of the tragic event were very depressing, especially the account of his last days.

The way the book focused on his son's death as the catalyst for an up and down second half of his career was intriguing. I especially liked how his daughter made it clear he wasn't just a victim when it came to the negatives in his life. His silent blame toward his wife over the tragedy likely led to her alcoholism. His frivolous spending habits and gambling problem were as much to blame for his IRS troubles as the people who took advantage of his generosity and his tensions with Bud Abbott were partly (but not solely) the result of him insisting on receiving 60 percent rather than an even split.

While the book focused mostly on Lou Costello, I thought it also provided a fairly balanced look at the rise and fall of the Abbott & Costello team. At least in my opinion, the book showed how the stress of being in business together for 21 years and having to deal with people who would try to take advantage of them could put a strain on any relationship. I don't think either of them were at fault, I think they were just overworked.

Final Opinion: This is a decent accounting of Lou Costello's life from the perspective a person who was as close to him as you are going to find. I would recommend this to any Abbott & Costello fan.