Book Review: The Case of the Vagabond Virgin by Erle Stanley Gardner (1948)

Synopsis: When department store owner John Racer Addison picks up hitchhiker Veronica Dale, pays for a hotel room for her and gives her a job, his intentions are pure. He just wants to make sure the 18-year-old is safe. However, before too long, attorney Perry Mason needs to protect his long-time client from a blackmailer who wants to make the act of charity into something more scandalous. To make matters worse, Addison's business partner, Edgar Ferrell, is found murdered and Addison's hitchhiker incident proves he was near Ferrell's house at the time of death, making him the top suspect. 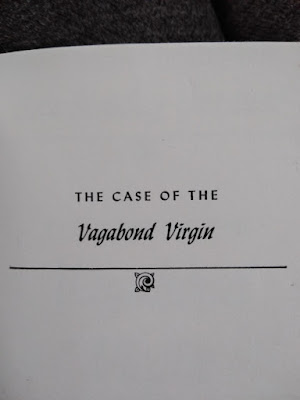 Review: After a short break from Perry Mason novels, I started reading this book this past weekend. It turned out to be easy to read and I was able to get through it in only a matter of a couple days. Overall, I have to say I enjoyed the book.

I think the thing I liked most about this book was the mystery surrounding the "vagabond virgin," Veronica Dale. As Perry Mason himself suspected, there was a lot about her story that just seemed like it was fabricated. But he struggled to find the evidence to prove that and, even then, it was unclear whether or not she was connected to the murder.

Her innocent vibe also put his client in a fairly tough spot as a key witness for the prosecution, reporting about hearing shots coming from Ferrell's house and seeing Addison driving from that direction when he stopped to pick her up. This, combined with the murder weapon belonging to Addison and the fact he was one of very few people who was qualified to cleanly shoot someone through the head from the angle and distance seemed to make Mason's case tougher, especially since the two partners did not get along.

The secondary story, involving the blackmail, also proved to be an interesting one. This is both because Mason, in an effort to trap the blackmailer, faced forgery charges and because it wasn't clear whether the blackmail was related to the murder or not.

Final Opinion: This wound up being an intriguing murder mystery with plenty of potential suspects despite a damning case against Mason's client. I'd recommend reading it.