Book Review: The Case of the Lazy Lover by Erle Stanley Gardner (1947)

Synopsis: When Perry Mason receives two separate $2500 checks from Lola Allred, he suspects something is amiss. When the bank confirms one of the checks is a forgery, he investigates and, when Mrs. Allred's husband is murdered, ultimately winds up defending her from allegations stemming from a witness that had been pretending to have amnesia. 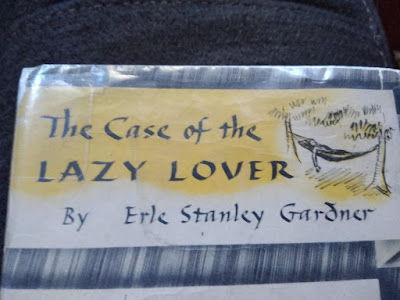 Review: I do enjoy most Perry Mason books I read, but, every once in a while, I come across one that just isn't quite as good as the others. This one fell in that category.

I think my biggest problem with this book was the murder mystery itself. Despite the book doing its best to make it seem like Mrs. Allred might by guilty by having her change her story multiple times and, at one point, even tell Mason she was the one who committed the murder, it wasn't too difficult to figure out who the real killer was. And, I didn't even need the evidence Mason had to find in order to come to the same conclusion.

Also not helping this book was the fact his client was accused in the first place. The police were basing their entire case solely on testimony from a man who had spent the majority of the book pretending to have amnesia and, more importantly, was the last known person to be with Mr. Allred when he was alive. Those two things alone should have raised enough red flags for the police to discount any testimony he gave, and I was especially disappointed it was Lt. Tragg who took it at face value. I would have thought he would have given it a lot more scrutiny than he did.

One thing that I did find I enjoyed a little bit was the discussion regarding the blood evidence. It was a reminder of just how difficult it was to prove a case based on that when the ability to collect DNA evidence wasn't a thing yet. Just as important, it showed just how easy it could have been to accuse the wrong person based on blood type alone.

Final Opinion: It wasn't necessarily a bad book. But, compared to many other Perry Mason mysteries, it did seem to lack something and, as I said, it wasn't too difficult to figure out who the killer was, despite efforts to make others look guilty.