Book Review: The Case of the Fan-Dancer's Horse by Erle Stanley Gardner (1947)

Synopsis: When Perry Mason recovers a pair of ostrich-plume fans following a car accident and attempts to return them to their rightful owner, he ends up representing a successful fan dancer accused of killing her estranged husband. 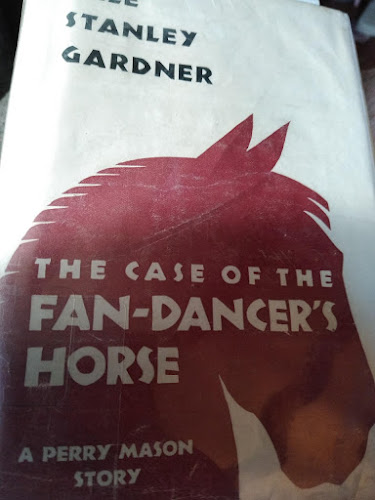 Review: I started out reading a non-Perry Mason mystery a few days ago but, after losing interest after only a couple chapters, pulled out this book instead. I finished it on Saturday morning and, overall, found I enjoyed the book.

There were a couple things I found I really liked about this mystery. One of the main ones was the fact everything seemed to be stacked against his client. She was identified by one of Paul Drake's detectives, a witness saw her burying evidence and multiple witnesses picked her out of a lineup.

Also adding to this mystery was his client's actions, which seemed to indicate her guilt. This included her stealing Mason's car and trying to flee from both him and the police. In fact, had it not been for the police insisting on charging Mason as an accomplice as a result, he probably would have dropped her as a client.

Additional complications included a mystery surrounding her horse, which may or may not have been used in a robbery attempt, and another fan dancer who was, with her permission, using Mason's client's identity. The latter seemed like it would be the obvious solution to his case, especially since the other dancer looked and dressed a lot like his client. However, the overall solution wasn't anywhere near as easy as that.

Final Opinion: This is a decent murder mystery that doesn't have a solution that is even remotely as easy as it might first seem. I recommend taking the time to read it.