Book Review: The Case of the Borrowed Brunette by Erle Stanley Gardner (1946)

Synopsis: When Eva Martell is selected, based solely on her appearance, for a mysterious job, Perry Mason is hired by her friend to make sure the job doesn't involve Eva doing something illegal. As Mason is investigating, things take an unexpected turn when the man who hired Eva, Robert Dover Hines, is found murdered by a gun that had previously been in the possession of Eva's chaperone, Adelle Winters. 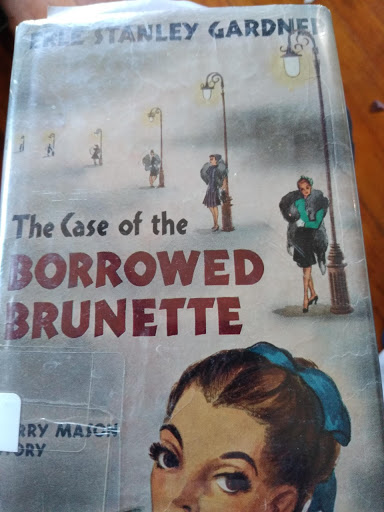 Review: For the most part, my efforts to read Perry Mason books have been a bit hit or miss. There were some I really enjoyed, others I didn't like all that much, and others that were, at best, average. After finishing this book early this morning, I now think of it as one of my favorites.

I think the thing that really caught my attention with this book was the way Mason got himself involved with a murder case purely by accident. He and Della Street were casually driving when he happened to notice multiple brunettes standing on street corners that were similar in appearance and dress. Things just picked up from there.

The murder mystery itself was also interesting because there was some pretty damning evidence against Adelle Winters and the only reason Mason agreed to defend her was because it was the only way to help his actual client, Eva (who was being charged as an accessory). He might have thought his real client was innocent, but I'm not sure he thought the same about Adelle, even as she gave him a reasonably plausible story.

Mason solving the mystery while he, himself, was being placed before a grand jury on charges of hiding his client from police added some additional suspense to the case, especially when the key piece of evidence he was relying on didn't pan out the way he expected it to. I wound up reading the book until the end this morning just because I had to know what was going to happen next.

Final Opinion: This is a good murder mystery that starts out with a relatively unique catalyst. I'd recommend taking the time to read it.