Book Review: The Case of the Half-Wakened Wife by Erle Stanley Gardner (1945)

Synopsis: When Scott Shelby goes overboard while trying to complete a business transaction on a yacht, his wife, Marion, who was found wandering the deck with a gun in her hand, becomes the prime suspect in his murder. Believing Scott Shelby faked his death and framed his wife, Perry Mason decides to defend her. However, things get more complicated when her husband's body is found with a gunshot wound that matched her gun. 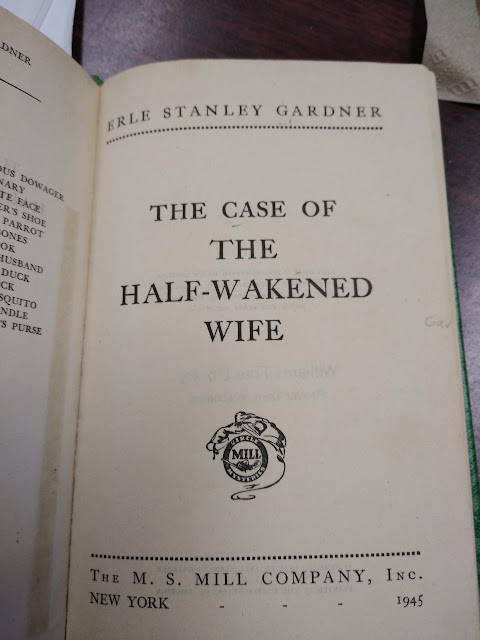 Review: OK, to be honest, when I started reading this book, I thought I would be bored out of my mind because, when it first starts out, there's a lot of legal stuff regarding oil leases, property escrows, etc. and definitely nothing that would hint this would turn into a murder mystery. But, after finishing the book last night, I have to say I did end up enjoying it.
I think one of the biggest surprises for me was who Mason's client turned out to be. I had an older copy of this book that didn't contain any sort of information as to what the plot was and, based on the first few chapters, I figured it would end up being the woman Mason was representing in the land dispute or the person buying the land. The fact the suspect was the victim's wife pretty much came out of left field, especially since she had only been introduced a short while earlier.
The mystery itself was also pretty interesting. My original thought was Mason was right about Shelby faking his death. Then his body was found. Then I thought maybe he was murdered after he fell off the boat. But, then it was revealed the fatal shot came from the same gun his wife was holding and the police had custody of. That, combined with Mason's suspect having an air-tight alibi, made this much more puzzling that I would first have suspected.
Another thing I liked about this book is it managed to show Mason's human side. This included the normally-tireless attorney/detective showing signs of fatigue and legitimate frustration when it looked like he was going to lose the case despite believing his client was innocent. It made him seem more real.
Final Opinion: The book starts out a bit slow but, overall, it winds up being a good mystery. I'd recommend it.
My Grade: B
books books worth reading classic books fiction books mystery books