Book Review: The Case of the Golddigger's Purse by Erle Stanley Gardner (1945)

Synopsis: Wealthy business owner Harrington Faulkner is obsessed with his exotic fish and Tom Gridley has a cure for their gill disease, a situation that has allowed Gridley's girlfriend, Sally Madison, to blackmail Faulkner in exchange for keeping his fish alive. When Faulkner is shot through the heart and the murder weapon is found in Sally's purse, Perry Mason reluctantly decides to defend her against murder charges despite the fact his client continues to be less than honest with him. At stake is Della Street's future because, as a result of bad luck, her fingerprints also happen to be on the weapon. 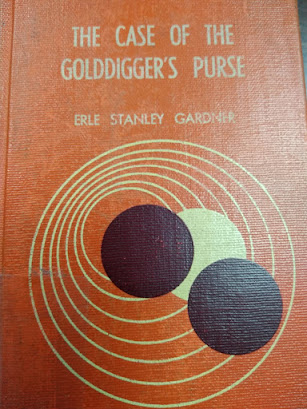 Review: I had originally started reading an autobiography earlier this week but quickly lost interest in it and started reading this library book instead. At first, I wasn't sure if I would like the book, mostly because there was a lot going on in the beginning (blackmail, a business dispute, another business dispute, possible marriage issues) but, once the book got going, I did find I enjoyed it.

I think the thing I liked most about this book was even Perry Mason seemed to think there was a good chance his client was guilty and, had it not been for the fact Della's fingerprints were also on the gun, meaning both of them could be charged as accessories after the fact, I'm not sure he would have even taken her case.

Also keeping the book interesting was the way things seemed to go from bad to worse, whether it was additional evidence against his client or a confrontation with a potential suspect that resulted in him being outplayed. His client's alibi not lining up also didn't help matters.

I also have to admit, some of his stuff he was focusing on in court, such as magazines that happened to be near the victim and fish from a broken tank, seemed almost like an attempt to stall rather than actual evidence in his client's favor. I'm also not so certain the piece of evidence that finally turned things around for him wasn't discovered completely by accident. In other words, him solving the case seemed like it was more the result of pure luck than anything else. This, in turn, added to the overall suspense.

Final Opinion: The first few chapters were a little difficult to keep up with but, once the book got going, it turned out to be an interesting mystery. I would recommend it as a result.