Book Review: The Case of the Crooked Candle by Erle Stanley Gardner (1944)

August 05, 2020
Synopsis: When he obtains a large settlement for his client following a car accident, Perry Mason feels it was a little too easy and begins to suspect the defendant paid the money to hide shady business dealings. When the wealthy businessman he's investigating is found murdered on board a yacht, Mason ends up defending the yacht's owner and must figure out how the ocean tides impacted the murder scene. 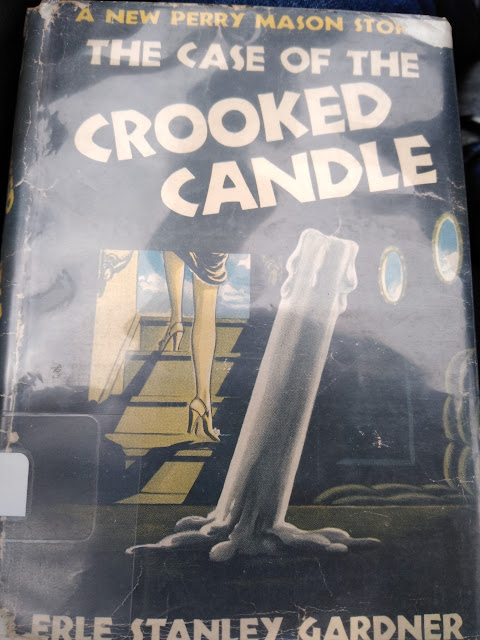 Review: I didn't intend to check out another Perry Mason book the last time I was at the library. However, I couldn't find the two books I did want and, needing to get back to the office, wound up grabbing this off the shelf on my way out.
Overall, it's an OK mystery but, to be honest, I found I didn't like it nearly as much as other books in the series.
I think the best way to describe this book is you need a score card to keep up with it. There are so many potential suspects. This includes Mason's client, who seemed to go out of his way to manufacture an alibi, the client's daughter, who helped him manufacture that alibi and was caught holding on to a pair of bloody shoes, the people the victim defrauded and, of course, his widow, who was cheating on him and seemed to know he was dead before anyone told her. Quite frankly, it was a little tough to keep track of who was who at times.
Then there was the part about the candle and the tides. Had this been explained visually, like in a movie or TV show, maybe it would have been easy to follow. But, even with the diagram illustration in the book, I just struggled to keep up with Mason's theory, which was based on everything from the candle in the room to the angle of a footprint located on the stairs.
In fact, by the time Mason made his reveal, I pretty much just took his word for it because my mind was fried. I think that might actually be a first for me.
Final Opinion: If you have enough experience with boats to keep up with all the tide information that gets thrown at you, it might be better. Otherwise, it might just be a little too confusing for some readers (like me).
My Grade: C
books books made into movies books worth reading fiction books mystery books