July 19, 2020
Synopsis: In 1917, 18-year-old Ruth Cruger disappeared shortly after picking up her newly-sharpened ice skates at a New York City motorcycle shop. The police investigate but, mostly because they believe Ruth has eloped with a secret boyfriend, are unable to find her. Months later, Ruth's father solicits help from attorney/detective Grace Humiston, who has made a name for herself helping immigrants and defending innocent death row inmates during an era when women still didn't even have the right to vote. 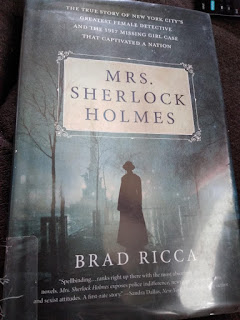 Review: I wanted to take a short break from Perry Mason mysteries and was in the mood for something educational. As a result, I wound up visiting the biography section the last time I was at our local library. This book caught my eye, partly because it was about a real-life mystery, and I decided to check it out. It turned out to be a very interesting book.
I thought the author did a solid job of telling his readers about a woman that, for reasons he describes in the epilogue, has mostly been lost to history. And, he does it in a way that makes you want to root for her while, at the same time, still shows her human qualities as well.
The mystery surrounding Ruth Cruger's disappearance was definitely memorable while, at the same time, also very sad. The book presents a compelling argument that she could have been found a lot quicker had it not been for police laziness and, more importantly, could have even been prevented if people would have come forward and outed the man responsible. As more details were revealed following her investigation, it was pretty easy to feel anger toward the people involved.
The stories about her earlier cases involving "white slavery" were also intriguing, especially her investigation into a plantation that was exploiting Italian immigrants (which ends up having a surprise connection Ruth's disappearance). It's a dark part of our nation's history that really should get talked about more.
One thing that really surprised me about this book was the way the author didn't just focus on Grace's successes and, instead, also was quick to talk about the failures that ultimately resulted in her fading into obscurity. This included her making allegations against a military base that she never successfully proved (destroying her credibility in the process) to her role in sending a potentially innocent man to death row. A lot of biographers shy away from the negative parts of their subject's life but her ability to make mistakes was one of the things that made Grace much more memorable than she might otherwise have been.
Final Opinion: If you enjoy biographies and/or true crime stories, this is a book that is worth taking the time to read.
My Grade: A
books books set in world war I books worth reading history books