Book Review: The Case of the Rolling Bones by Erle Stanley Gardner (1939)

July 11, 2020
Synopsis: When the wealthy Alden Leeds is committed to a mental hospital by relatives looking to protect their potential inheritance by preventing him from getting married, Leeds' niece, Phyllis, asks attorney Perry Mason to intervene, only to find out Leeds has already escaped on his own and gone into hiding. Later, a man believed to have been blackmailing Leeds is found murdered and Mason must defend his seemingly guilty client despite Alden's reluctance to tell the truth. 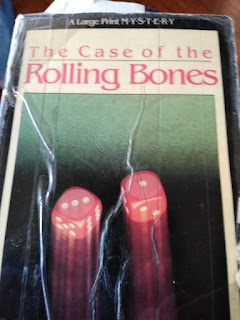 Review: After reading this book for the past couple of days, I was finally able to finish it early this morning, while everyone else was still in bed. At first, it took me a bit to make a decision about whether or not I liked this particular mystery. After some reflection, however, I do think it was a decent book.
One of the main reasons why it took me as long as it did to decide whether I liked this book was there were a lot of characters introduced, many of which had very little to do with the actual mystery and, because some of those characters went by multiple names, I did find myself having a little trouble keeping track of them. Other than that, however, it did end up being an interesting murder mystery.
I think the thing that I found most interesting was the way Mason always seemed to be a step behind in this particular mystery. This is both because his client was very reluctant to let the attorney help and was obviously hiding something. and because the police/prosecutor once again took some illegal measures, including bugging his office and Paul Drake's office, so they knew what he knew plus had additional evidence he didn't know about until the case was in court.
Adding to the suspense was, whenever he seemed to finally gain the upper hand by finding a surprise witness, that witness would have information that would make the case against his client even stronger.
Truthfully, even though I correctly guessed at the truth behind a key piece of evidence in the trial, I did find myself wondering if this would be one of the rare cases when his client turned out to be guilty.
Final Opinion: If you're anything like me, you might want to write down the various players in this book so you can keep track of who is who. However, the overall mystery was a good one, especially with Mason seemingly being off his game for a good chunk of the book, and I would recommend taking the time to read it as a result.
My Grade: B
classic mystery courtroom mystery murder mystery mystery books mystery novels