Book Review: The Case of the Haunted Husband by Erle Stanley Gardner (1941)

July 13, 2020
Synopsis: After being fired as a hat check girl and not wanting to go back to her rich but controlling uncle, Stephane Olger decides to change her name to Stephane Claire and hitchhike to Hollywood for a fresh start and a shot at being a movie star. However, before getting to her destination, one of the men driving her decides to cross a line and, as she's defending herself from his amorous assault, he crashes into oncoming traffic.
She comes out of the crash with minor injuries but wakes up to find the driver has fled and left her behind the wheel of what was reported to be a stolen vehicle. With authorities reluctant to believe her story, it is up to attorney Perry Mason to prove she wasn't the one responsible for the fatal accident. His job becomes even more difficult when the man he believes was driving the car is found murdered. 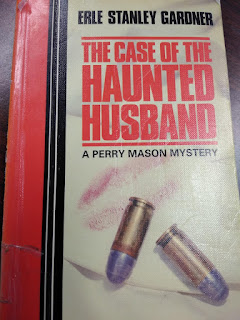 Review: When I started reading this book Saturday afternoon, while cooking some chicken and zucchini on the grill, I wasn't expecting to finish it before the weekend was over. However, I wound up having a bit of a lazy day yesterday and, as a result of that, made it through the book by yesterday afternoon. Unfortunately, I didn't like this one as much as other books.
Don't get me wrong, I didn't hate the book. It's just there were some things about it that kind of bugged me.
I think the biggest problem, for me at least, was the case against his client was, at best, weak. There was so much physical evidence backing up her version of what happened, any attorney could have gotten her acquitted without breaking a sweat. As a result of this, even though there were two murders that  wind up being somewhat connected to the case, there ultimately was no real sense of urgency when it came to solving them because there was nothing that made it seem like his client was in any real danger of going to prison.
I think one thing that would have helped this book significantly is removing the first couple of chapters that describe all the events leading up to the crash in detail. Before Mason is even hired, the reader knows she's innocent. I think it would have been considerably better had the book kept the reader in the dark about that instead.
I also feel like Mason ultimately dropped the ball a bit when it came to his client because he was so determined to prove the car's owner was responsible for damages/his client's court fees yet, in the end, that didn't even happen (unless I missed it). If anything, he sort of proved the exact opposite.
One thing I did find I enjoyed about this book was, once again, Mason's interaction with Lt. Tragg. As I've said in other reviews, he is a more than worthy adversary for Mason and his keen detective skills and ability to figure out what Mason is really doing are pretty much the only reason this mystery had any real suspense. Quite frankly, if he and Mason were to REALLY team up, they would have no problem solving any murder.
Final Opinion: It's not the worst murder mystery I've ever read or even the worst from this series. But, largely because the reader is given too much information right off the bat, I don't think it was as entertaining as it could have been.
My Grade: C
classic mysteries classic mystery courtroom mystery murder mysteries murder mystery