Book Review: The Case of the Drowning Duck by Erle Stanley Gardner (1942)

July 04, 2020
Synopsis: John L. Witherspoon has a problem. His daughter, Lois, is in love with and wants to marry Marvin Adams. But, Witherspoon knows a secret about his daughter's fiancé, his dad was convicted of murder 18 years ago and executed. He doesn't want his daughter to marry a murderer's son but, before breaking her heart, wants to make sure authorities didn't convict the wrong guy. As a result, he hires attorney Perry Mason to reinvestigate the case.
Things, however, take a strange turn when a private investigator with knowledge of the 18-year-old crime is found murdered with evidence that points to Adams and, later, a second murder results in Witherspoon being arrested for both crimes. 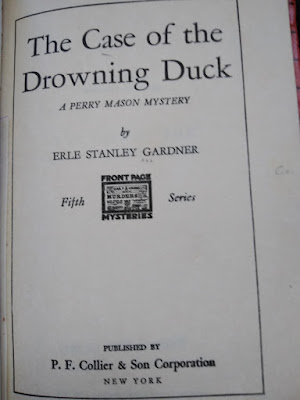 Review: I had planned on taking a break from Perry Mason books and, instead, checked out a modern murder mystery written by a European author. However, as much as I tried, I just couldn't get interested in it and ultimately wound up returning to the library to pick out an author I was much more familiar with.
I took this book out of order with the rest of the series and was a bit concerned not reading the previous books would make a difference. Fortunately, it didn't and, overall, I did find I enjoyed this mystery.
I think the thing that really stood out for me was the fact Mason could have very well been defending a guilty client. After all, the part about the "drowning" duck clearly pointed toward Adams and the only evidence to the contrary was false evidence planted at Mason's command. And, when the second murder happened, Witherspoon was the most obvious suspect simply because he happened to be the only one inside the house (other than unnamed servants) when it happened. It also wasn't that big of a stretch to think of him as a suspect in the first murder too.
The big wild card, for me at least, was Lois. Not only did she have information that could get Mason in a lot of trouble (and was willing to testify to it in open court), I wasn't completely convinced she was as innocent as she acted. Plus, she had just as much motive to commit murder as her fiancé did.
Plus, those three only scratch the surface of a variety of other potential murderers ranging from a corrupt detective agency, to mysterious house guests and even the wife of the man Adams' dad supposedly murdered.
I also thought Mason's courtroom strategy was intriguing, choosing to allow witnesses to answer damning questions so he could prove his own theory later. The fact he had to do that while also working to prevent Lois from blowing things up by announcing his planted evidence made it somewhat suspenseful though, admittedly, I thought his big reveal would have been a little better had it been done in open court rather than the judge's chambers.
Final Opinion: It's an entertaining mystery with plenty of twists and turns. It probably falls a little short of being on my list of favorite Perry Mason books but it was still a good read.
My Grade: B+
classic mysteries murder mysteries mysteries