Book Review: The Case of the Careless Kitten by Erle Stanley Gardner (1942)

July 07, 2020
Synopsis: Helen Kendal has not heard from her uncle, Franklin Shore, since he disappeared 10 years ago. So, she is surprised when a man claiming to be him calls her on the phone and asks her to bring attorney Perry Mason to meet him. This sets off a whirlwind day of events that include finding a dead body, her boyfriend being shot and her new kitten being poisoned. 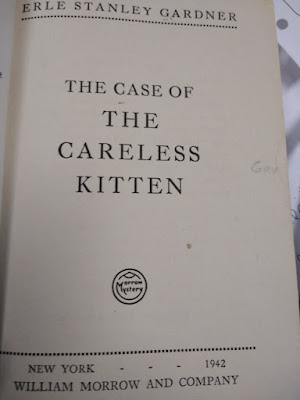 Review: My daughter returned to the ice rink earlier this summer and, since parents aren't allowed inside due to this COVID pandemic, I have a lot of time to read while waiting for her out in my car. As a result, I managed to make it through this Perry Mason book in near-record time. After doing so, my overall opinion of it was mixed.
As far as the mystery went, I was honestly not that impressed with it. I think it's because the book threw in a bunch of red herring characters that ultimately had nothing to do with the main plot and, since it was pretty obvious what really happened to Franklin Shore, it wasn't too difficult to figure out who the bad guys were (though, admittedly, there were a couple small details I missed).
Not to mention, during the big reveal at the end, the book pretty much glosses over why Mason was even involved in the first place. I don't want to give away any spoilers but his involvement almost seems kind of random considering what the perpetrators were trying to pull. Was he just summoned to be a reputable eye witness? Were they hoping he would do something to keep the police confused? Did they just pull his name out of the phone book? Considering his well-publicized history of solving crimes, the decision to get him involved really needed more explanation than it was given.
Truthfully, probably the only interesting thing about the mystery itself was the kitten and why it was poisoned. There didn't seem to be any real motive (other than one that was a little farfetched) and it was likely done by someone in the house. Sadly, even that ended up being a bit of a letdown when the reason for the poisoning was finally revealed.
All that being said, I did find I enjoyed the way the book branched out a bit and showed us more of Lieutenant Tragg's investigation. This is mostly because I was actually kind of impressed with the job he was doing. You wouldn't know it from some other books, but his character is actually a fairly competent detective. So, while I didn't enjoy the mystery nearly as much as I hoped, I did appreciate the effort to show one of Mason's regular antagonists in a way that proves he is a more than worthy opponent for the attorney.
Final Opinion: The mystery itself was disappointing. But, the book does a decent job of character development so I'd still recommend reading it.
My Grade: B-
classic mystery courtroom mystery murder mystery