Book Review: The Case of the Buried Clock by Erle Stanley Gardner (1943)

July 23, 2020
Synopsis: Jack Hardisty is suspected of embezzling money from a bank owned by his father-in-law Vincent Blane. When Jack is found murdered at Blane's cabin, his widow, Milicent, who was seen near the cabin disposing of a gun, becomes the primary suspect and attorney Perry Mason is hired to defend her. Adding some mystery to the case is an alarm clock that was found buried near the cabin but was then moved shortly before Jack's body was found. 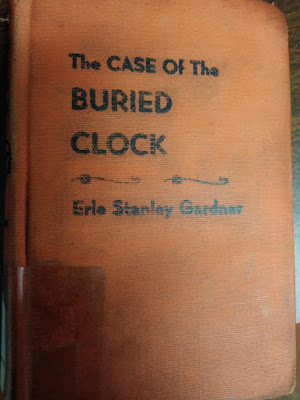 Review: I've had more time to read recently, thanks mostly to this COVID pandemic messing up my normal routine, and was able to get through this book relatively quickly as a result. At first, I wasn't really sure what to think of it (other than be afraid this very old copy would fall apart) but, after finishing it last night, I do think it ended up being a decent mystery.
The best part about this book, in my opinion, had to be the clock. It was discovered in the very first chapter and, based both on that and the book's title, everything in my gut told me it had to be important. Yet, there was absolutely nothing about that discovery that seemed to even remotely relate to the murder case. As a result, I didn't know if it was a very good red herring or if there was something I was missing. Of course, to be fair, Perry Mason himself was confused about it until the very end too.
The court case itself was also intriguing because the odds were definitely stacked against his client. Multiple witnesses put her near the scene in a questionable mental state and with a gun in her hand. Her husband was known to have stolen money from her father and she was also having an affair, giving her motive. Plus, there was evidence her secret lover, a doctor, removed the bullet from the body to prevent it from being matched to her gun. And, while there were others who could have potentially committed the murder, they either lacked a motive, opportunity or both.
Having Mason square off against a young and successful prosecutor with a unique way of presenting cases was a nice touch, mostly because it was so unusual to see Mason being thrown off his game as much as he was, whether it was surprise evidence and testimony or the prosecutor putting Mason in a position where his cross examination of a witness could actually strengthen the prosecution's case. It made me wonder if his spotless court record would wind up with a pretty big blemish.
Final Opinion: As I said before, I wasn't too sure about this book when I started reading it. But, after finishing it, I do think it was one of my favorite Perry Mason mysteries.
My Grade: A
classic mysteries murder mysteries mysteries