Book Review: As You Wish: Inconceivable Tales From the Making of The Princess Bride by Cary Elwes (2014)

July 25, 2020
Synopsis: In 1987, The Princess Bride received a tepid response at theaters. However, thanks to a new technology, VHS, the movie, which combines action, comedy and romance, became an all-time favorite spanning multiple generations. Actor Cary Elwes tells the behind-the-scenes stories that took place over the months the movie was being filmed. 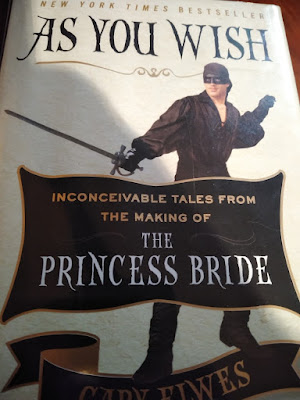 Review: I was reminded of this book a few days ago, when I saw it referenced in an article I was reading. Realizing I had never taking the time to read it despite the fact it was about one of my all-time favorite films (if not THE favorite), I decided to correct it. Fortunately for me, it was at our local library.
I finished the book a little while ago and have to say I will never look at the movie the same way again (and I mean that in a good way).
Elwes does a great job of telling the movie's story scene-by-scene and the challenges director Rob Reiner faced getting it off the ground, whether it was dealing with an over-protective writer, actor Wallace Shawn's paranoia about being fired or hiding the fact Elwes broke his toe prior to some of his most important scenes. His descriptions, combined with input from the others who were involved with making the film, were very educational, both when it comes to this movie and filmmaking in general.
I think my favorite part of this book had to be the stories about late actor/pro wrestler Andre the Giant. I grew up watching him both in the ring and in films like this one but this book really brought out his human side. He was a guy who was protective of his co-stars (including keeping Robin Wright warm by placing his hand on her head), always had a smile on his face despite being in pain from his body breaking down and once brought the production to a halt by passing gas. Between Elwes' description of the gentle giant and comments from others involved with the film, it was easy to tell he was loved by all of them and the stories make his death at a relatively young age even more sad.
I also enjoyed the way Elwes centers the book around the prep work leading up to probably the greatest sword fighting scene in movie history. Instead of just summarizing it, he starts from the beginning (two actors with virtually no fencing experience learning from scratch) and refers back to it throughout the book, essentially building up to the finished product. Hearing the amount of work that went into preparing for a scene that uses no stunt doubles (at least as far as the actual sword fighting is concerned) only makes that scene even more impressive.
Final Opinion: If you are a fan of the movie, this is a book you need to take the time to read.
My Grade: A
books books worth reading history books non-fiction books