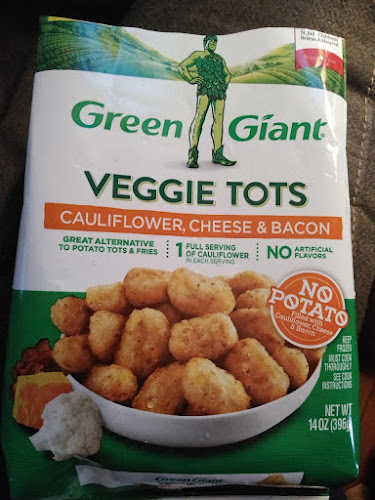 My wife was in the mood for BLTs tonight so, while I was at the store picking up some tomatoes, I decided to look for something to make as a side dish. This was something we had been wanting to try and I thought the cheese & bacon would be a good complement so I picked up a bag for $4.99.
Overall, I have to say these were pretty good. It was probably because of the cheese, but had I not seen the bag, I probably wouldn't have known these were made from cauliflower rather than potatoes. Heck, I'm somewhat certain they would have even fooled the kids.
I also thought the tots were surprisingly filling. I didn't think that would be the case because of them being made from cauliflower, but we were every bit as full as we would have been if they were made from potatoes. We even had a few leftover.
I did think the tots were a bit lacking when it came to the bacon side of things. I could definitely taste the cheese, but really couldn't taste the bacon at all. In fact, had I not seen the packaging, I wouldn't have known it was in there.
I also thought the tots did come out a little on the soft side. My wife made them in the air fryer and, normally, tater tots come out crisp. These were a bit mushy. Not to the point they were disgusting. But, to the point they looked a bit more like mozzarella bites than tots.
Final Opinion: I'm not sure if I would buy them at $4.99 the next time (I'd wait until they were on sale). But, we did like these and I wouldn't be opposed to having them again.
My Grade: A
food food reviews food shopping freezer foods frozen food