Book Review: The Case of the Substitute Face by Erle Stanley Gardner (1938)

June 15, 2020
Synopsis: After traveling the world with his secretary, Della Street, attorney Perry Mason is anxious to get back to work as soon as the cruise ship docks at home. He doesn't have to wait that long, however, because another passenger, Mrs. Newberry, wants to hire him to investigate a possible embezzlement by her husband, Carl, and protect her daughter, Belle, from the possible scandal. Things get more complicated when Carl goes overboard and the police suspect his wife of murder. 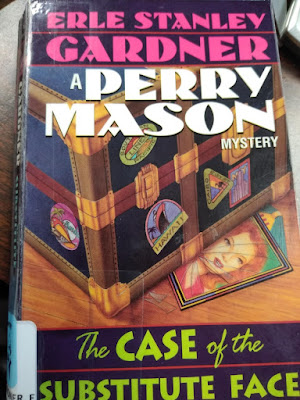 Review: Our local library re-opened today, meaning I can finally visit in person. But, in the mean time, I am still working my way through the books I got through the mail from them, including this Perry Mason mystery.
At first, I wasn't really sure what to think of it, especially since I was able to correctly figure out at least part of what actually happened to the victim while on the cruise ship. But, overall, this did end up being an interesting mystery.
I think the thing I liked best about this particular case was the fact Mason finally seemed to be up against a district attorney that was every bit as good as he was. Not only was Donaldson P. Scudder on top of his game, he seemed to always stay a step ahead of Mason, preventing him from getting to evidence first and even keeping a surprise witness a secret until just before calling her to the stand.
There was also a great deal of question about whether or not his client was telling him the full truth about her husband, especially as the book progressed and it became more clear that the sum of cash Carl happened to be carrying with him likely didn't come from the source everyone thought it did but was still obtained through some other illegal enterprise. On more than one occasion, the book hinted that maybe it belonged to his wife rather than him.
I also enjoyed Mason's courtroom antics in this book and the way he found holes in the witnesses' testimony. I actually kind of wish that part of the book started sooner because it might have made the entire mystery even more interesting.
Final Opinion: This wound up being a very interesting murder mystery that I continued to enjoy even after I figured out at least part of the whodunit. It's worth taking the time to read.
My Grade: B+
classic mysteries courtroom mystery murder mystery mysteries