Book Review: The Case of the Shoplifter's Shoe by Erle Stanley Gardner (1938)

June 20, 2020
Synopsis: When Perry Mason witnesses Sarah Breel being accused of shoplifting, he decides to intervene on her behalf. When she is later hit by a car and sent to the hospital, he eventually finds himself defending her against a murder charge. Complicating matters is the defendant's insistence the accident caused her to have amnesia and she has no memory of whether or not she actually committed the crime. 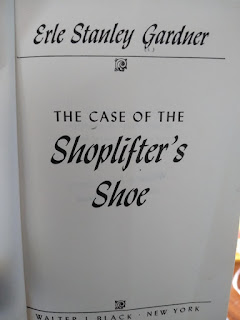 Review: To be honest, when I first started reading this book, I found it a bit hard to stay interested. In fact, there was a moment when I considered just skipping to the end to find out what happened. This is mostly because I thought the book took a little too long to get to the main mystery, leaving me in doubt as to who Mason was supposed to be defending and why.
However, once the book finally got going, I have to admit, I did enjoy it.
There are a couple things about this book that I really liked. The main one was the seemingly insurmountable wall Mason had to overcome in an effort to defend his client. All evidence pointed to her. The gun was in her possession. There was blood on her shoe and she had stolen diamonds in her purse. And, while she claimed she had no memory of what happened, she was of sound enough mind following her accident to be making that part up.
Also adding to the overall suspense were a police detective and prosecutor who were willing to take every action possible to make sure Mason couldn't win the acquittal, including installing a microphone in Mason's office and encouraging witnesses to perjure themselves on the stand.
I also have to say I loved the ending and the twist that had Mason not only using a strategy to defend Sarah but, at the same time, helped build a defense for a completely different yet-to-be-named murder suspect. It was definitely a surprise, especially since he basically used the prosecution's questionable tactics against them. That's the kind of stuff that will have me wanting to read more books from this series.
Final Opinion: It started out a bit slow (at least in my opinion). But, this did turn out to be an interesting book and I would recommend it.
My Grade: A-
murder mysteries murder mystery murder novels