Book Review: The Case of the Lame Canary by Erle Stanley Gardner (1937)

June 04, 2020
Synopsis: When Rita Swain asks Perry Mason to represent her sister, Rosalind Prescott, in a divorce matter, he isn't interested. However, he is curious about the seemingly injured canary Rita happens to be carrying and agrees to take the case in exchange for learning more about why. At first, he is disappointed by her story. But, when Rosalind's husband, Walter, is found murdered, he eventually winds up defending Rita against the charges. 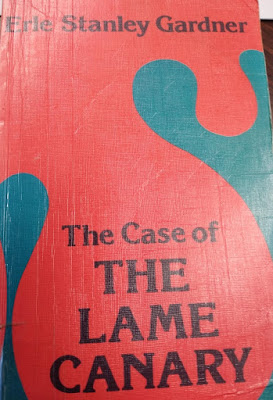 Review: When I decided to take advantage of our local library's COVID-related mail-order service, I opted to double down on Perry Mason and checked out this book as well as The Case of the Dangerous Dowager. After finishing the latter, I immediately started on this book and, overall, I have to say I enjoyed it.
To tell you the truth, I did have a moment where I felt like I had to force myself to continue. The introduction of the book was a little on the dull side and I was admittedly a little confused about what, exactly, Mason was being asked to do since the details were a little vague. This actually continued to be the case for a little while after Walter Prescott was found murdered, mostly because it took the book a while to pick a favorite suspect (Rita) in the crime.
That being said, as the book progressed, it did manage to be very entertaining. I especially liked how eye witness testimony essentially eliminated the two other obvious suspects in the death (who also happened to have the most to gain from it). I wasn't sure if that meant there was someone completely different involved or if they found a way to pull it off while being watched like a hawk by their nosy next door neighbor.
Also adding to the mystery was the car accident that happened right around the same time Walter was being murdered. I suspected the book would eventually reveal a connection between the two things but I wasn't really sure what that connection was.
In the end, I wound up making a guess that was partially right. I didn't name the person pulling the trigger but did finger a suspect who was involved in at least part of the story. Though, admittedly, it wasn't close enough to really count.
Final Opinion: It took a little effort on my part to stick with it long enough to get interested in the plot. But, overall, I did enjoy reading this mystery enough to make me consider checking out another book from this series in the future.
My Grade: A
books classic mystery murder mystery