Book Review: The Case of the Dangerous Dowager by Erle Stanley Gardner (1937)

June 01, 2020
Synopsis: When Matilda Benson wants to hire attorney Perry Mason to help negotiate a payoff of her granddaughter Sylvia's gambling debt to Sam Grieb, he reluctantly agrees. However, when Grieb is eventually found murdered, Sylvia becomes the primary suspect with Mason facing charges as an accessory. The attorney must work quickly to prove his client's innocence before the police arrest him. 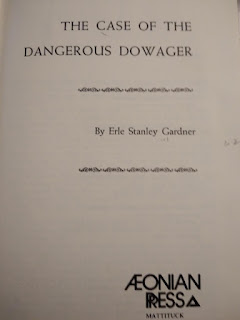 Review: Our local library is still closed because of this COVID pandemic. However, they did start allowing people to have books mailed to them and I took advantage of that. Since I didn't really know what I wanted, I figured I would give Perry Mason another try. And, as it turns out, this book became one of my favorites from the series.
Overall, this is a great locked-room mystery. There are a bunch of potential suspects, including Grieb's partner, Charlie Duncan. However, the fact there was only one entrance and eye witnesses laid out a timeline that implicated either Sylvia or Mason as the potential killer, it seemed like it would only be a matter of time before his goose was cooked, even as he was finding out more information about the potential players.
Sylvia's grandmother was also an interesting piece of the puzzle. I wasn't overly convinced she was telling the truth when she told Mason why she happened to be on the gambling boat as well and there just seemed to be something about her that made me think she was both dishonest and clever enough to pull a fast one on Mason.
The funny part was the mystery turned out not to be overly difficult to solve. As I explained to my daughter, the clue is right out in the open for everyone to see and I just missed it. All I can say is, after taking a short hiatus from reading murder mysteries, I might have lost my touch a bit. It's the only explanation.
Final Opinion: I haven't been a big fan of most Perry Mason books but this is one that I definitely enjoyed reading and would recommend.
My Grade: A
books classic mysteries murder mystery