February 08, 2020
Synopsis: Biographical book about Reckless, a Korean race horse that was conscripted by the United States Marine Corps during the Korean War and, because of courage under fire, quickly became a hero. 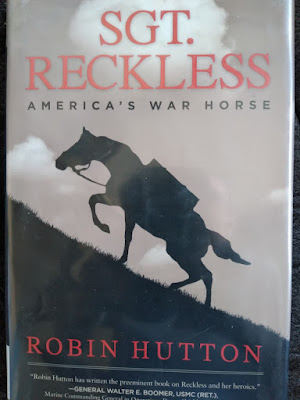 Review: I was at the library when my oldest daughter sent me a text saying she needed the science book she left at home and, because I had a limited amount of time before having to get back to the office, I wound up picking out this book pretty much at random. I have no idea why it managed to catch my eye in the first place, but it wound up being a very interesting read.

To be honest, when I started reading this, I figured it would be a nice feel-good story about a horse that was nothing more than a mascot. But, as I began reading about her exploits, which included everything from hauling ammunition to rescuing wounded soldiers while avoiding enemy fire, I had a hard time putting the book down. She truly was remarkable, especially when you consider she completed a lot of her missions without a human escort and had every opportunity to just run away.

The part about her being brought back to the United States following the cease fire was also intriguing. I was amazed with all the red tape involved just to get approval even though, at that point, she was a well-known war hero that, despite being a horse, received a legitimate promotion to sergeant (as opposed to an honorary rank that meant nothing).

The part that really caught my attention though was the description of how much of a toll her combat experience took on her, both physically and emotionally (the part about her having nightmares was heart breaking). It's the kind of thing that really drives home the fact she was more than just an animal.

Another thing I liked about this book was the way it managed to describe the Korean Conflict itself. My knowledge of that military action is honestly limited to what I've learned watching re-runs of M*A*S*H so the various first-hand descriptions of some of the battles really helped me understand just how bad things were at the front lines.

I also gained a new appreciation for some of the unheralded heroism that took place during those battles, particularly when the book described accounts of Marines removing their flak jackets and risking their own lives so they could protect Reckless. In fact, if I had any real complaints about this book, it would be the fact we didn't learn more about them.

Final Opinion: This is an interesting and inspirational book that is about more than just the horse on its cover. I'd recommend taking the time to read it.