February 14, 2020
Synopsis: When Lochdubh Police Sergeant Hamish Macbeth meets a new nurse, Gloria Dainty, he is instantly attracted to her and, under the pretense of visiting her wealthy employer, James Harrison, follows her home and ultimately convinces her to have dinner with him. What Hamish doesn't know is Gloria is leading a less-than-honest life and, before they have their first date, he winds up investigating her murder. 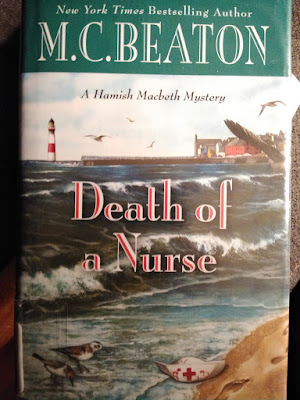 Review: After being somewhat disappointed by the last Hamish Macbeth book I read, I was honestly a bit hesitant to start this one. However, I did manage to read it over the course of the past few days and, after finishing it last night, did think it was pretty good.

I think the thing I liked best about this book was the fact there wasn't an obvious killer. This hasn't been the case with some previous mysteries in this series and I found I enjoyed not knowing, for sure, who the bad guy was until toward the very end.

The victim's seedy past contributed heavily to this by creating a surprisingly large number of suspects. This included her employer, her employer's family and her partners in crime, just to name a few, and it seemed like Hamish would find a new potential suspect every couple chapters.

I am a bit undecided about his new constable, Charlie. While there are some differences between him and Hamish's former helper, Dick, including his clumsiness, I think, much like Dick, he is a little too likable and, because of that, Hamish sometimes seems like more of a sidekick than a hero.

One thing I definitely am growing a bit bored with is Priscilla Halburton-Smythe. It would be one thing if she still was actively involved with his cases, as she was in the past. But, in the later books, it seems like she just gets mentioned for the sake of reminding us her and Hamish were once engaged and she has as bad of luck with men as he does with women. Unless this is going to lead somewhere (and, so far, it doesn't seem to be that way), it might be time to move on from that character.

Final Opinion: This wound up being a decent murder mystery that I definitely enjoyed reading. At minimum, it was one of the better books from the latter part of the series.