February 05, 2020
Synopsis: Liz Bentley is a well-known liar who has a history of filing false police reports. So, when she calls up Sergeant Hamish Macbeth asking for help while he is already investigating a double homicide, he chooses to ignore her. When he finds her body the next day, he suspects her homicide might be related to the two previous victims and searches for a connection. 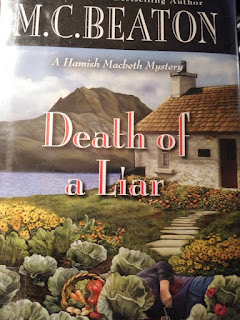 Review: I'm not sure if this book was shorter than some of the others I've read or I just had a little more free time this week but I started reading this book Monday and had it finished by Tuesday evening. Overall, I thought it was an OK book but, after some reflection this morning, realized it wasn't one of my favorites from this series.

There were a couple things, in particular, that I found I wasn't a fan of when it came to this book. The first is the mystery is a little too easy to solve. I kept hoping for some surprise bad guy, but the obvious villains turned out to be the ones behind the various murders and, as has been the case on a few too many Hamish Macbeth books, a little too much of the story focused on the manhunt rather than the investigation. This, in itself, wouldn't be too big of a deal, but the manhunts always seem the same and usually include Macbeth getting taken hostage.

The other thing that really is starting to bother me when it comes to this series is Macbeth himself. He's just not as likable as he was in earlier books and, quite frankly, seems to be slipping a bit. The fact he completely ignored Liz Bentley's cry for help is a good example of that. The old Hamish Macbeth would have checked on her regardless of her history of telling lies, something that would make him more of a hero.

In fact, I'm almost disappointed he wasn't punished for it. After all, his argument for keeping his little police station open is so there's someone available to check up on those living in remote areas and he pretty much did the exact opposite of that. And, when you combine that with some of the less-than-honest things he does, including blackmailing his supervisor, I'm not sure how he is any better than the characters we aren't supposed to like.

I'm also finding myself growing a little weary of Hamish's ongoing romantic struggles. I probably wouldn't care so much about him having a love interest related to his case but these books always seem to find a way to bring back Priscilla and Elspeth and those romances (or lack of) are getting a bit repetitive and uninteresting. Truthfully, I'd much rather see him finally get together with Angela Brodie and deal with the fallout caused by him having an affair with a married woman than hear about him lusting after his former girlfriends again.

One thing I did like about the book was the decision to let his constable, Dick, move on. A big part of the reason for this is, even though Beaton tried to make Dick look extra lazy and like a potential wolf in sheep's clothing, I think he was likable and smart enough to diminish Macbeth in comparison. I'm not sure about his new addition to his small police force yet, but maybe this change will help breathe some fresh life back into the series.

Final Opinion: I didn't hate it, but I am starting to think this series may be running its course a bit and, unless something drastic happens to Hamish (marriage, relocation, etc), I'm not sure I'll enjoy the last books as much as I enjoyed the earlier ones.