February 22, 2020
Synopsis: When Sergeant Hamish Macbeth is asked to investigate reports of a ghost in a castle owned by a retired police superintendent, he assumes it is just someone pulling a prank. But, when he and his constable, Charlie Carson, find the body of a well-known and outspoken atheist in the tower, he once again finds himself looking for a murderer. 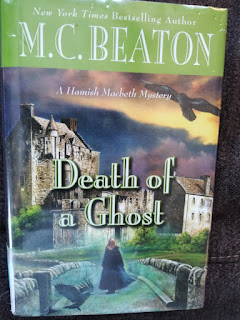 Review: After enjoying Death of a Nurse, I decided to check out the remaining Hamish Macbeth books at the library so I can finish up the series (or at least be caught up if/when another book comes out). I finished this book last night and found I loved it.

The mystery in this book was surprisingly complex. When the first body was discovered, my first thought was the police superintendent who called him was somehow responsible. But, as the book progressed, it was pretty obvious that wasn't necessarily going to be the case. There were just too many other potential suspects ranging from smugglers to religious zealots and potentially an angry husband or two. And, when there is another, seemingly related, murder later in the book, it just adds additional confusion to the mystery.

Plus, I have to admit, I was surprised when the killer was revealed. I don't normally get caught off guard by a surprise twist but this book had one that I just did not see coming.

Another thing I liked about this book was, other than the first chapter and a few other paragraphs about his latest failed relationship (which was actually kind of funny), the book focused on the murder and not the hero's love life. It's not that I don't enjoy the ultimately mystery about whether or not he will ever find a wife, it's just I don't enjoy books that make that the central theme at the expense of his investigation.

I am also somewhat intrigued about the dark path his nemesis, Chief Inspector Blair, is starting to walk down. It was bad enough for Macbeth when Blair was trying to find ways to either get him kicked off the force or shut down his police station. Now, it is reaching a point where Macbeth might have to worry about an attempt on his life. It'll be interesting to see what happens with that as I finish up the books in the series.

Final Opinion: I think this one was one of the better mysteries in this series. I enjoyed reading it, was definitely stumped by it and would highly recommend it.