January 06, 2020
Synopsis: At the tail end of World War I, President Woodrow Wilson agreed to place American troops under British command as the latter invaded Russia on the pretense of guarding supply stockpiles from the Germans but with the secret mission of supporting resistance to the Bolshevik Revolution. This non-fiction book tells the story of some of the men who took part in the failed military campaign. 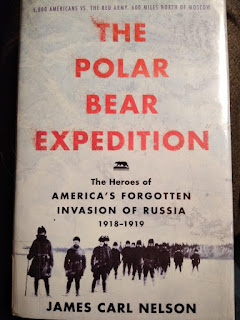 Review: I was recently reminded about this rarely talked about military campaign while reading The Ghost Ships of Archangel and, when I came across this book at our local library, I decided to check it out. After finally finishing it last night, I have to say I wasn't disappointed.

The author does a good job of bringing the men who participated in and, more often than not, died, in this event back to life by sharing details about their lives back in the United States as well as their dreams and goals. This information, gathered from family members, letters and diaries really made it easy to care about what happened to them. In fact, it was actually surprisingly easy to get a bit angry about the men dying when paired with the knowledge their mission was pretty much futile to being with.

I think the thing that really surprised me when reading this book was the poor conditions these men had to endure and how those conditions led to just as many deaths as Russian bullets. This included an outbreak of the flu that couldn't properly be treated in makeshift, under-equipped hospitals and the men being forced to survive the freezing conditions without the proper clothing. Hearing about how many died on sea voyage to Russia because of confined quarters and an inability to access winter attire was particularly humbling.

It was also interesting to read how the British maintained full control of the campaign, including the use of temporary field promotions to make sure the American commanders were always outranked. It really made me wonder if maybe the alliance between America and the British wasn't quite as strong as other history books make it seem.

Probably my only real complaint about this book is I would have liked to read more about the actual battles themselves. They were referred to throughout, but only in context of talking about a particular soldier. I'm willing to overlook it for the most part because that was the primarily objective of this book. But, considering there are so very few recent books discussing this subject, it would have been nice to have a little more detail about those.

Final Opinion: This is a very entertaining book about a dark, largely forgotten chapter in American history. I highly recommend taking the time to read it.