January 22, 2020
Synopsis: When someone begins sending anonymous "poison pen" letters to village residents accusing them of random indiscretions, police officials pay little attention to Hamish Macbeth's pleas for expert help. This changes when a local post mistress and the suspected letter writer are both murdered and Macbeth is once again forced to track down a killer. 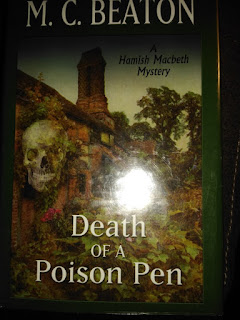 Review: I originally wound up skipping over this book several weeks ago because it went missing at our local library and I decided it was better to skip ahead in the series rather than wait patiently for it. So, when I saw it was finally available again, I was quick to grab it and start reading it right away. As it turns out, I wound up enjoying it to the point I read it in near-record time.

I did kind of wish I had an opportunity to read it in the correct order because there were several times when I became temporarily confused and had to remind myself that a certain event hadn't happened yet. But, overall, I thought it was a fantastic mystery.

I think the thing that intrigued me most about this mystery had to be the two separate murders. One of them, involving the person who was writing the accusing letters, made a lot of sense. The other one, involving a post mistress, who was likely a poison pen victim herself, was kind of baffling. Was the murder committed by the same person? Was it related to the letters or was there a completely different motive? That second victim and the questions surrounding her death made this much more complex, at least in my opinion, than it might have been with just one victim.

I did have some mixed opinions about the secondary story involving one of Priscilla Halburton-Smythe's "friends" traveling to Lochdubh in an effort to hurt Priscilla by seducing Hamish. There were some moments when it was a little bit entertaining but, as her story progressed and she, instead, became obsessed with an underachieving newspaper reporter, I honestly had a hard time staying interested, especially when the story became more about the reporter than her. I actually kind of wish she would have succeeded in seducing Hamish just because I feel the backlash from that would have been slightly more entertaining.

Final Opinion: The secondary story involving Priscilla's friend probably could have been better but, fortunately, the murder mystery keeps the book entertaining and, overall, I enjoyed it. I would recommend taking the time to read it if you get a chance.