January 14, 2020
Synopsis: In 1944, Allied forces believed the war in Europe was almost over and even placed bets about it ending by Christmas. They did not realize Adolf Hitler was planning one last, desperate holiday offensive. 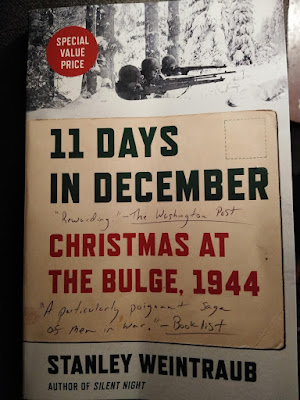 Review: I usually go to the local library rather than buy books because I read them too quickly. However, my wife came across this book a few weeks ago and purchased it for me as a Christmas present. I was intrigued and, once I was caught up with my library books, I sat down to read this one. Overall, I was impressed.

I have heard and read about the Battle of the Bulge before and, because of that, there was some familiarity with some of the facts and people involved. However, I liked how this book brought things down to a more personal level and showed the battle from specific individual perspectives.

One thing, in particular, I liked about this book is the way it focused a lot on the ton of misinformation that was going around during the early hours of the Nazi offensive. This, along with the various distractions related to the upcoming holiday, led to early success for Germany and ultimately had American and British soldiers going on wild goose chases relating to false reports of paratroopers and other military actions.

I especially liked the story about the general who was stopped at gunpoint and grilled extensively because of reports of German infiltrators in American uniforms and his lack of knowledge of basic American facts used to verify his identity. It was a little bit humorous but, at the same time, it gave me a real sense of how on edge those sentries must have been.

Another part of this book I really liked was the story involving Marlene Dietrich needing to escape because she was visiting troops when the offensive started. It gave a pretty decent glimpse at just how dangerous that war was for visiting civilians as well. I really liked the part about her putting herself in a little more danger than needed because she liked collecting war souvenirs because little details like that help make me believe I was there even though it happened roughly three decades before I was born.

Final Opinion: This is an entertaining and educational history book that had me interested from the first page. I'd recommend taking the time to read it if you get a chance.