Book Review: Postcards From the Edge by Carrie Fisher (1987)

December 02, 2019
Synopsis: After nearly dying from a drug overdose, actress Suzanne Vale goes to a rehab clinic and, after successfully completing the program, tries to get her life back in order and her career back on track. 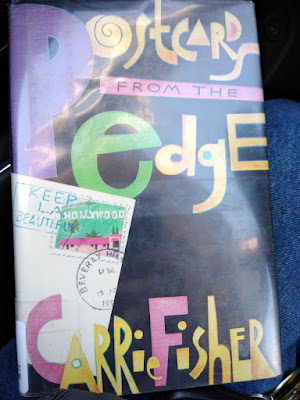 Review: While I prefer murder mysteries, I do still try to occasionally change things up by checking out a book from a genre I wouldn't normally read. This book wound up making the cut mostly because I recognized the author and figured a story that is loosely based on her own drug problems would be interesting. For the most part, I found I was right.

Truthfully, I'm not sure if I liked this book enough to want to read any of Fisher's other books and, to be fully honest, there were times when I did regret not checking out a book in my preferred genre instead. But, as I braved through this, I did find there were a lot of things I liked about it.

I think the thing I was most impressed by was how Fisher managed to talk about a very real problem in a way that kept things from getting too dark and depressing. She didn't cross a line where she was making fun of people with drug problems. She just kept it lighthearted enough for the reader to feel comfortable having the occasional good laugh over something one of the characters did or said. This, in turn, actually managed to make the more serious stuff stand out a bit more because there was something to compare it to.

I think my favorite part of the book had to be the way she kept getting told she was "too serious" after just her first day back on the job and two minutes of filming. It was both funny and, assuming it is realistic, made me understand why an actor or actress might turn to drugs to help with the stress. And that, in turn, made me wonder if Suzanne would manage to stay clean or if she would wind up in rehab again (or worse).

The decision to change things up as the book progressed, starting with journal entries before switching to a first-narrative and finally telling the rest of the story from a third-person perspective was admittedly intriguing, albeit a little confusing the first time one of the changes occurred.

Normally, I wouldn't think this would be something I would enjoy. But, the change in perspective allowed the reader to get a much more in-depth view of Suzanne than they might have otherwise gotten if the book had stuck to just one of those methods. It also managed to keep the book a little less predictable. If it had been told from a first-person perspective throughout, for example, it would have been easy to know she survives at the end. The change to third-person made that a little less clear and is a big part of the reason why I read the entire book.

Final Opinion: It's not a book I would normally read but, overall, I did enjoy it. I highly recommend taking the time to read it if you get a chance.