Book Review: The Ghost Ships of Archangel: The Arctic Voyage that Defied the Nazis by William Geroux (2019)

December 14, 2019
Synopsis: In July 1942, convoy PQ-17 set sail from Greenland to northern Russia to deliver weapons and other supplies to aid in their fight against Nazi Germany. The voyage is a treacherous one, with the ships under constant threat of attack from submarines and air strikes. It becomes even more impossible when the military vessels assigned to protect the shipment is ordered to withdraw and the merchant ships are told to scatter and fend for themselves. The surprise change in events forces four ships to attempt a dangerous detour north that could cause them to be sunk by Mother Nature before the Germans even get a chance to do it. 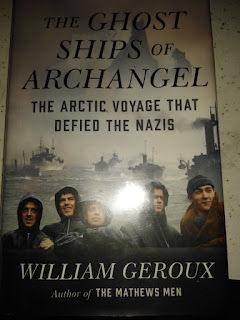 Review: I came across this book while at the library last week and, as someone who is a fan of history, I decided to give it a read. I finally finished it earlier today and have to say I enjoyed it even more than I was expecting to.

I think the thing I loved most about this book was the way the author managed to put human faces to the event. I've read a lot of non-fiction books that only focus on the basic facts without much added detail so it was refreshing to read one that realized the importance of going above and beyond. Learning about some of the sailors who were risking their lives and hearing their own words (via journals and letters) describing what they were going through made it feel much more like I was there with them rather than just reading about something that happened 33 years before I was born.

I also liked how Geroux took the time to talk about the people and events that were responsible for the scatter order that put so many ships in additional danger. I was especially intrigued by the narrative regarding the German battleship, Tirpitz, that ultimately resulted in a major allied failure despite never firing a shot.

In fact, I was kind of intrigued with the decision by both sides to avoid using their best warships whenever possible. I would have expected naval officers to want to use their best weapons, not treat them with kid gloves in an effort to avoid getting them sunk, even if it is a mission that could potentially shift the outcome of the war effort.

The book also does a fairly decent job describing the politics involved with keeping Russia in alliance with Britain and the United States, complete with the differences of opinion and the backstabbing that ultimately resulted in the Cold War. World War II was never one of my favorite history subjects, but this book did admittedly make me want to learn more. And, that is something that really stands out.

Final Opinion: I wasn't really sure if I would enjoy this book when I started reading it. But, it wound up being both informative and entertaining. I'd recommend taking the time to read it.