December 23, 2019
Synopsis: Morag Merrilea is unfriendly and arrogant. So, when she comes to Sergeant Hamish Macbeth claiming she was drugged, potentially raped and had her sketchbook stolen, he isn't overly anxious to help her. However, when Morag's body is discovered and, later, other seemingly-connected murders happen, Hamish must try to retrace Morag's steps to find out what happened on a night she didn't even remember. 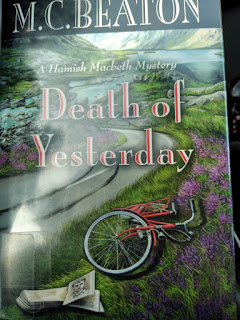 Review: I was fighting a bit of a head cold the past few days and, because of that, had a hard time focusing enough to get through this book in a timely fashion. However, I did finally finish reading this mystery this past weekend and, after doing so, did think it was worth my time.

The mystery in this book was actually pretty interesting. This is because, even though it might have centered around something Morag might have seen (and potentially sketched) while sitting at a pub, her lack of memory about that night did complicate things considerably. In fact, since there was no evidence proving she was drugged, it was very possible her murder and the others that followed were related to something completely different.

Hamish's involvement with Hannah, the sister of one of the suspects, was also somewhat interesting, partly because I half wondered if maybe she was potentially an overlooked murder suspect herself. The fact he gave in to a night of physical attraction, only to instantly regret it and risk losing his job as a result, did add a little extra drama to the overall story, especially since it seemed like something she could potentially use against him later if she did turn out to be the killer.

Along similar lines, I am growing more and more intrigued by his constable, Dick, who is proving to be shrewder than he first appeared. Up until this point, he has used his hidden talent to help Hamish but, as was proven later in the book, it is very possible he could just as easily make Hamish's life a living Hell if he chose to. That does make me wonder if he will eventually become a nemesis.

My only real complaint about the book is I did think the ending was a bit dragged out. This seems to be becoming a common theme with books in this series and, while I probably wouldn't mind it too much, having a bad guy escape custody only to return to the scene of the crime does have the potential to get a bit repetitive. It would be nice to see that changed up every once in a while.

Final Opinion: The ending could have been shortened. But, the murder mystery and some of the things that were set up for future stories made the book worth reading and I would recommend it as a result.