December 28, 2019
Synopsis: Desperate to close down the Lochdubh police station and be rid of Hamish Macbeth, Chief Inspector Blair sends officer Cyril Sessions on an undercover operation to dig up dirt on the police sergeant. When Sessions is brutally murdered, Macbeth begins to suspect a restaurant owner with potential drug connections. However, his investigation is mysteriously hindered by his superiors. 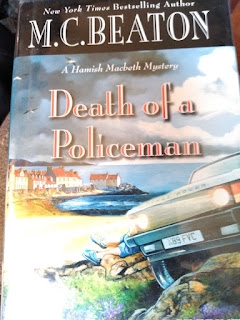 Review: It was a little hectic this week because of the holiday and, because of that, I had to go out of my way to make time to read. However, I was finally able to finish this murder mystery this morning and, after doing so, was happy with the result.

The mystery itself was actually kind of weak. Hamish had his initial suspect almost from the beginning and, as a result, rather than a whodunit-style mystery, it became more about him finding away around all the various forms of interference (including breaking the law) to prove he was correct. And, even the "surprise" twist about who really killed Cyril Sessions wasn't anything that was unexpected. I pretty much figured that out about midway through the book.

That being said, the overall story still proved to be entertaining. Since his primary suspect had quite a bit of influence over the police, it did make me wonder if Hamish would find a way to prove his case or if he would ultimately wind up being caught breaking the law and punished.

And, I must confess, some of the dark turns he is forced to take in this book, especially toward the end, when he is trying to save his police station, were very unexpected, largely because they were out of character for him. It really makes me wonder if it is all going to come back to haunt him at some point.

The side story involving his constable, Dick, continues to be intriguing, especially with Hamish now trying to find ways to get his police station to himself again, even if it means proposing to a woman he just met. I do have to wonder just how that will end considering Dick seems a little more willing to leave if a woman is involved but also seems to have as much bad luck with love as Hamish does. Now that Hamish's ex, Elspeth, is onto him, it'll be interesting to see what happens next.

Final Opinion: As I said before, the mystery itself is a little too easy to figure out. But, the book was still a fun read and I would recommend it.