December 06, 2019
Synopsis: Blessed with good looks, charm and a strong business sense, Mary Leinster is the perfect choice to oversee the Fairy Glen that has brought an economic boon to the town of Braikie. After all, even Sergeant Hamish Macbeth is falling in love with her. However, when the kingfisher that had been one of the main draws to the glen is killed and strung up in a ritual-like fashion, things continue to go downhill from there and Hamish is drawn into an investigation involving murder, theft and Russian hitmen. 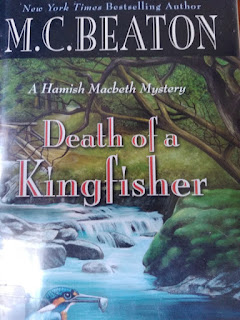 Review: After taking a short break from murder mysteries and reading something outside my normal comfort zone, I was happy to get back to reading an author I was familiar with and learning more about what is to become of Hamish Macbeth. Overall, while I didn't like it quite as much as some of the earlier books from this series, I did find I enjoyed it.

I think the thing that really stands out about this book is the complexity of the case. When the kingfisher is killed and, later, a bridge is sabotaged, it points to someone being opposed to the glen. But, when the glen's neighbor, who was originally opposed to it, is murdered in a way that suggests a potential professional hit, it became apparent the case was considerably more complicated, especially since there wasn't anything that seemed to connect the two.

I also liked the idea of having Hamish's ability to be objective in the case compromised by his immediate attraction to Mary. It was pretty easy to see she was playing him (as she apparently did with any man she came across) but, at the same time, I found I had a hard time not rooting for him considering his past failed romances.

At first, I wasn't sure what to think about his new constable, Dick, and kind of figured he would just be yet another one that would prove to be a failure and leave by the end of the book. But, as the book progressed, I kind of found I liked him. I think he has the potential to be Hamish's new "Watson" when trying to solve cases. I also liked the fact that, while even more lazy than Hamish, he is also deceptively clever and even has a photographic memory. I can see those things coming into play in future books (assuming he doesn't get written out).

I think my only real complaint about the book is, as has been the case with some others in this series, the ending is a bit drawn out. Maybe it's just me, but I prefer murder mysteries that keep the killer's identity a secret until the last chapter (maybe followed by a short epilogue). It's not that the extra chapters are necessarily bad, it's just I have a hard time staying interested once the case is closed.

Final Opinion: As I said before, I think the earlier Hamish Macbeth mysteries were better but I did find there was a lot to like about this one too. I would still recommend taking the time to read it.