November 04, 2019
Synopsis: For 36 years, Lucy Vereker has believed her lover, Paul Ackerley, murdered his former best friend (and her former crush) Gerry Grantworth. Now, nearing death, she learns Paul has believed she was the one responsible for Gerry's death. Seeking to find the truth, the couple tries recollect their separate versions of the event leading up to that day in the hopes of solving the mystery. 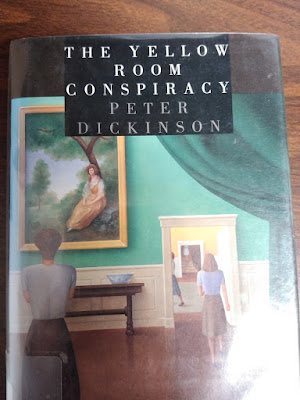 Review: I first noticed this book at our local library a couple months ago and, while I wasn't interested in checking it out at the time, did think it sounded interesting enough to consider for a future date. I finally wound up checking the book out the last time I was at the library, a couple weeks ago, and finished reading it last night. After doing so, my opinion of it was a bit mixed.

I'll start out by saying there were a couple things about this book I really did enjoy. For one, I thought the various characters were interesting to read about. This included the main characters and the future murder victim as well as most of the supporting characters, including the members of Lucy's family. I thought it was fun to read about them and their lives both before and after World War II and in their later years.

Also, as a former history student, I did enjoy how Dickinson focused on some of the behind-the-scenes details from World War II, avoiding the actual combat parts of the war and, instead, talking about the intelligence community and how the war affected those who weren't necessarily in the military. Reading about how Lucy and Paul's romance blossomed through all of this and after did manage to keep me interested.

My biggest problem with this book is it is a bit lacking as far as being a murder mystery goes. Part of this, I admit, might be a matter of personal preference. But, at the same time, when you're more than three-quarters of the way through the book and the person who is supposed to be dead is still alive, I do think it takes something away from the crime.

At minimum, waiting so long to reveal when and how Gerry was murdered took away some of the fun that usually accompanies a book like this because there is very little opportunity to sort through the clues and figure out who the killer is prior to the big reveal, especially since there are so many potential suspects to sort through. I think it would have been more enjoyable, for me at least, had the murder been discussed earlier in the book with Lucy and Paul working their way backwards rather than starting from the beginning and discussing the murder last.

Final Opinion: I did find I liked the book for the most part. However, I was kind of disappointed the murder mystery turned out to be a bit of a dud.