November 07, 2019
Synopsis: After a disappointing holiday, Constable Hamish Macbeth is relieved to be returning to his hometown of Lochdubh. However, as soon as he gets home, he can't seem to shake a feeling of foreboding, which he immediately traces to newcomer Catriona Beldame.
When many of Lochdubh's married men come down with a similar ailment, Hamish believes it is related to a "herbal" aphrodisiac Catriona has been providing. But, before he can prove she is doing something illegal, Catriona is murdered. 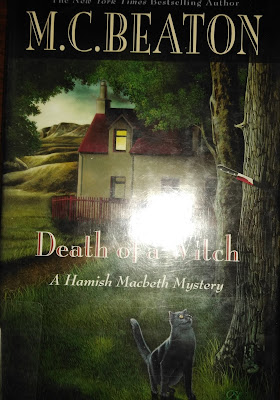 Review: After first reading the other two books I checked out at the library at the same time, I finally got around to reading this book a couple days ago. And, much like other Hamish Macbeth mysteries, I found myself having a hard time putting it down.

When I first started reading this book, I thought the mystery would wind up being relatively easy to solve. After all, Catriona's murder obviously was the direct result of the harm she was causing the community. All I had to look for was a man who was angry enough to get revenge on her. However, it turned out to be a much more complex and entertaining mystery than I was expecting.

Catriona's shifty past did a lot to increase the number of potential suspects, especially outside of Lochdubh. There seemed to be an awful lot of people who were harmed by her and were potentially angry enough to get revenge on her. However, I think what really managed to keep me from solving this murder or even having a suspicion about who the killer might be (something that doesn't happen often) were the three additional murders.

Two of those murders seemed simple enough, the victims knew who the killer was (or at least claimed to) and were murdered for their silence. But, the third additional victim seemed to have no connection to the other two and, as a result of that, it was hard to figure out if it was one murderer or if there were two (or more) murderers. As a result of this, all I was able to do was make a wild guess at who the killer was (minus a motive) and that guess wasn't even close.

The part about Hamish's ongoing troubles with two trigger-happy poachers was also a very memorable part of this book. In addition to creating some potential danger for him, it was also hard to tell if they were connected to the murders or if their presence was completely coincidental.

As always, Hamish's ongoing romantic troubles, this time involving a new forensic scientist and his two past lovers, Elspeth and Priscilla, also managed to provide a nice, lighthearted distraction. I kind of find it funny that Hamish is always portrayed at being unlucky in love when, in fact, it seems like his exes seem to have much worse luck than him. Of course, if maybe their timing was a little bit better (making their move when he isn't distracted by a murder), it's very possible he would be married to one of them by now.

Final Opinion: This was an entertaining book with a surprisingly complex murder mystery. I would recommend taking the time to read it.