November 15, 2019
Synopsis: Raised by strict parents, Annie Fleming chooses to rebel by using her good looks to manipulate men, including her local boss and the local minister. So, when she is killed by a bomb disguised as a valentine, there is a seemingly endless list of suspects for Sergeant Hamish Macbeth to comb through. To make matters worse, the constable assigned to help the newly-promoted Macbeth, Josie McSween is more interested in tricking the sergeant into marrying her. 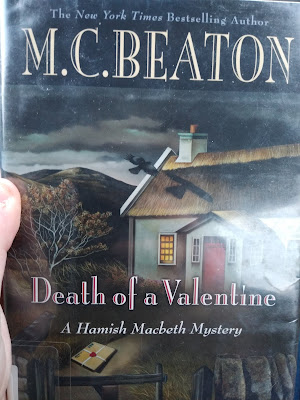 Review: After finishing up the Perry Mason book I was reading earlier this week, I immediately got started on this murder mystery, which I had checked out at the library at the same time. And, once again, I wound up enjoying the book so much, I had a hard time putting it down. In fact, if my eyes were getting tired to the point the words were blurry, I probably would have finished this the same day.

There are a couple things I found I really enjoyed about this particular book. The first one was the mystery, which proved to be very complex and entertaining. Not only does Hamish have to look at Annie's former jilted lovers, he also has to include potentially jealous wives and even the local drug dealer.

Further complicating things is his corrupt supervisor, Chief Inspector Blair, who, in an effort to protect his criminal friends, winds up causing potential witnesses to be killed and puts Hamish's life in danger. This, combined with the large number of suspects, made the mystery a lot harder to solve than I was expecting it to be. In fact, I wasn't even close when I guessed at the killer.

At first, I wasn't sure I would enjoy the part about his obsessed constable, Josie. But, as the book progressed, I found I was as interested in that story as I was the actual murder.

A large part of the reason for this, I think, is I found myself actually feeling a little sorry for her. Obviously, I couldn't condone the steps she was taking (including some that were very illegal) in an effort to trick Hamish into making her his wife. But, there are times in the book when she shows flashes of real potential. This includes her winning over some of the local population when she first starts making patrols and even finding some obscure clues, including the one that ultimately solves the case.

As a result of that, it did make me sad her potential was being wasted because she was more interested in becoming a wife than being a police officer. In fact, I kind of hope she gets a chance to redeem herself in a later book.

Final Opinion: This book has an entertaining mystery and a side story that is equally as entertaining. I would highly recommend it.