November 25, 2019
Synopsis: When Captain Henry Davenport is found murdered and stuffed inside his chimney, the local chimney sweep, Pet Ray, who was in the home around the same time, is the primary suspect. But, when Pete's body is also found, Sergeant Hamish Macbeth believes the murders are related to Davenport's shady business dealings and concentrates his investigation on four men who claimed to have been conned by the deceased Captain. 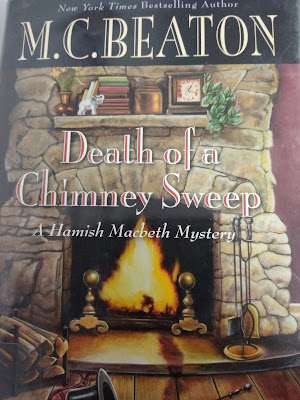 Review: Hamish Macbeth mysteries have become one of my trusted "must-haves" whenever I visit our local library in search of books to read. So, when I stopped by last weekend in a bit of a rush, this was the first book I grabbed off the shelf. Unfortunately, this one just didn't live up to my expectations, especially when compared to other books from this series.

Let me start out by saying the title of this book is very misleading. Yes, there is a chimney sweep and he is murdered. But, other than the first couple of chapters, he is pretty much treated like an afterthought as Macbeth focuses his investigation around Davenport's murder.

This, in my opinion, is the biggest reason why this book was a bit of a flop in my eyes. The murder of a local chimney sweep who is liked by everyone and at least seems to have a clean past is interesting. The murder of a con artist with rich enemies just doesn't have the same potential.

To be honest, I kind of feel like Beaton might have phoned this one in because there wasn't even a sincere attempt to throw in a red herring or two. Yes, there are some local people who were also conned out of money by Davenport. But, none of them ever seemed to be serious suspects and Macbeth ultimately had the mystery wrapped up halfway through the book.

In fact, the mystery was so weak, the majority of the book seemed like filler material, especially toward the end, when the book just kept going on and on even though the case was solved and those involved were arrested, out of the country or dead. There were quite a few chapters dedicated to Hamish's "affair" with Angela Brodie and even more dedicated to one of the killers taking his sweet time trying to get revenge on Macbeth, followed by the police sergeant having to break the law to protect his cat.

Don't get me wrong, the side stories involving the other villagers have always been one of my favorite things about this series and I kind of figured Hamish's friendship with the married Angela would eventually create some controversy. I just don't think they should make up the majority of the book, especially when the murder mystery is the least interesting part of the story.

Also, maybe it's just me, but many of the series regulars just seem to be less interesting than they used to be. One, in particular, that comes to mind is Elspeth Grant. One of the things that really stood out about her was her psychic abilities. Now, they aren't even mentioned. Did she lose them when she became a celebrity? If so, then we should at least get an explanation, especially since her contributions to his cases seem to be much smaller than they were before.

Final Opinion: As I said before, I usually love Hamish Macbeth mysteries but something about this particular one did make me wonder if the author just got a bit lazy. It is easily my least favorite of the series so far and I can only hope it isn't going to get worse going forward.