Book Review: The Case of the Stuttering Bishop by Erle Stanley Gardner (1936)

November 22, 2019
Synopsis: Attorney Perry Mason is visited by Australian Bishop William Mallory, who is seeking his assistance in helping a woman who was wrongfully accused of manslaughter by her father-in-law 22 years earlier and is now seeking to secure an inheritance for her daughter. The problem is, the bishop speaks with a stutter, leading Mason to believe the man might be a fake. 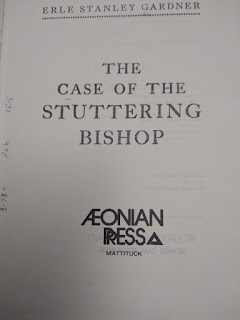 Review: I had a bit of a time crunch this past weekend, when I stopped at the local library in between running other errands. As a result, instead of looking for something unique to read, I stuck with authors I knew, including this particular book.

I've read a few Perry Mason books now and, overall, my opinion of them has been a bit mixed. There have been some that were entertaining mysteries. But, at the same time, I have come across some that just didn't excite me. Unfortunately, this book fell in the latter category.

I think the mystery itself, which did predictably eventually include a murder, had some potential, especially since Mason's client wound up being the most likely suspect with everything from physical evidence to eye witnesses pointing in her direction. And, there was admittedly something interesting about the mysterious Bishop Mallory, who, based on the fact he stuttered (something you wouldn't expect from a high-ranking church official, at least in that era), could easily be a fraud with his own agenda.

The problem with the book is it just seemed like it everything was just dragged out a little too much. In other words, there seemed to be a lot of talking and not a whole lot else, at least until we got toward the later chapters.

As a result of that, I did find I had a hard time staying interested. In fact, it took me longer to read this book than it normally would because I was struggling to stay entertained enough to read more than one chapter at a time. And, that's something that doesn't normally happen. To be honest, by the time I finally did get to the end of the book and the complex mystery finally unraveled, I wasn't really all that interested in who the killer really was and was more or less just relieved I finally got through the book.

Final Opinion: It really was an intriguing mystery. But, unfortunately, there was just something about the way this book was written that made it hard for me to stay focused and entertained and I didn't enjoy it nearly as much as I would have expected.