Book Review: The Case of the Sleepwalker's Niece by Erle Stanley Gardner (1946)

November 12, 2019
Synopsis: Attorney Perry Mason is hired to help wealthy Peter Kent navigate through an ugly divorce and an attempted takeover bid by his crooked business partner. However, when one of Kent's house guests is stabbed and the bloody knife is found under his pillow, Mason must also defend his client against murder charges. The only evidence he has in his favor is Kent's niece, who claims her uncle sleepwalks. 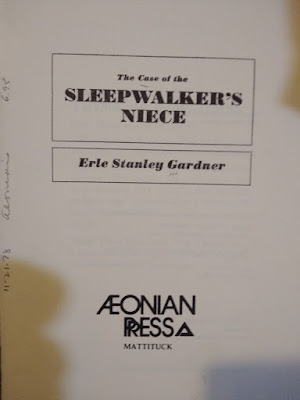 Review: I took a short break from Perry Mason books following The Case of the Caretaker's Cat, but decided to check another one out while I was at our local library last week. I was able to read this book in a relatively short amount of time and, for the most part, did enjoy it.

The mystery itself, to be honest, was a bit weak. I was able to figure out who the murder victim was going to be long before he was actually dead and, based on who that victim was and the "casual" circumstance that was meant to make his murder seem to be a case of mistaken identity, it wasn't too difficult to point the finger at the killer.

That being said, even though the murder case wasn't overly interesting, there were still things I liked about this book. In particular, I loved the courtroom battle between Mason and the prosecutors, which started with him being accused of misconduct, proving that his seemingly illegal acts were actually perfectly legal and served a purpose and, ultimately, proving the prosecution was doing some things that weren't overly ethical in an effort to convict his client.

And, I have to admit, the big reveal involving Kent's niece was something I did not see coming. I kind of figured there was more to her than the book was letting on. But, Mason's revelation, along with how it affected the evidence, was something I wouldn't have even thought of.

I also liked how Mason, despite all the effort he was making to keep his client from being convicted, still manages to follow through on the original task he was hired to do and secure a divorce for Kent. In fact, his method for doing that was actually kind of fun to read, especially since he also winds up helping another client at the same time. That's the kind of thing that will get me reading the next book in the series.

Final Opinion: As I said before, the actual murder mystery is a bit weak and, despite attempts to throw in some red herrings, it wasn't too hard to figure out who the killer is or the motive behind the murder. However, the book still managed to have just enough surprises to keep me interested and I would recommend it as a result of that.