Book Review: The Haunting of Hill House by Shirley Jackson (1959)

October 29, 2019
Synopsis: After years of caring for her now-deceased invalid mother, Eleanor Vance is all too happy to accept an invite by Dr. John Montague to investigate paranormal rumors at the secluded Hill House mansion. She quickly forms a friendship with Montague and the two other guests, an artist by the name of Theodora and the home's heir apparent, Luke Sanderson. However, as the house guests begin to experience supernatural phenomena, Eleanor's mental stability comes under question. 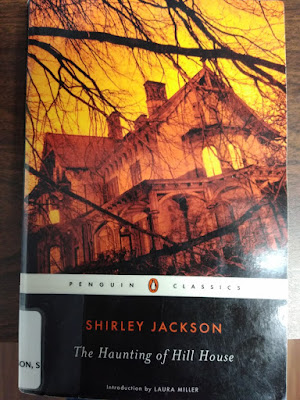 Review: I was in the mood to take a short break from murder mysteries and, after remembering I had seen this book at our local library, decided to check it out. Even though it was relatively short, it took me a bit longer to read than I was expecting it to and, I finally finished it early this morning. Ultimately, after a few hours of reflection, I have to say this book wound up being a pleasant surprise.

I'm going to be honest, through the first hundred pages or so of this less-than-200-page book, I was planning on writing a negative review. I thought, for a "ghost" story, this book was kind of dull. After all, the majority of it consisted of a group of four people having a bunch of conversations with each other.

Then, about halfway through the book, I realized the supernatural occurrences at Hill House weren't really the story. The book, instead, is about Eleanor and how her interaction with those supernatural experiences affects her overall psyche. And, once I realized that, I had to admit, the book was considerably better than I was expecting.

I think the thing I really liked about that angle was the way it put some of the paranormal activity into question. While there was certainly evidence of ghosts, such as a mysterious cold spot by the nursery, Eleanor also seemed to be imagining a lot of it as well. As a result, it was difficult to figure out what was really a ghost and what was the direct result of Eleanor losing her mind. Plus, it really made me wonder just how far she would go. In other words, would her paranoia reach a point where she would snap and kill one (or more) of the others?

I also liked the mystery surrounding Eleanor and her strange connection with the house. It (or at least the spirits inside of it) seemed to be targeting her. This made me wonder if maybe the activity had less to do with the house and more to do with her, whether it was paranormal or a direct result of her just being mentally unstable to begin with.

Another thing I enjoyed when reading this book were the various supporting characters. The author gives just enough information about each of them to bring them to life but also manages to keep a slight air of mystery about each of them. As a result of that, I did find myself questioning their various motives. Were they really there to investigate ghosts, or was this an elaborate plot designed to purposely drive Eleanor insane and she was right to be paranoid.

I think my only real complaint about this book is it does seem to drop the ball a bit when it comes to possible clues. For example, when Montague's domineering wife joins the investigation and claims to communicate with the spirits using a planchette, she talks about a nun buried inside a wall and a hidden well in the basement. Yet, nothing ever happens with it. They don't even bother to check the basement for the well, something I would think her husband would take the time to do, even if it is just to prove she is a fraud. It would have been better to have seen that explored in some way.

Final Opinion: I don't usually change my mind about a book midway through, especially if I start out hating it. But, that is exactly what happened this time around. As I said before, I thought I would be writing a negative review but, instead, I am recommending this book.