October 19, 2019
Synopsis: Constable Hamish Macbeth doesn't really like Mavis Gillepsie. But, when he wins her maid services in a church raffle, he reluctantly lets her clean his house. When he discovers Gillepsie, a notorious snoop, has swiped a personal letter he had left on his table, he decides to confront her. Unfortunately, someone has already gotten to her first and now he is stuck investigating the murder of a woman who was likely blackmailing her clients. 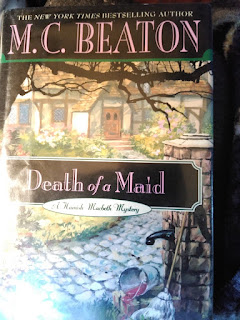 Review: I had started reading a completely different book but, after about five chapters, realized I just couldn't stay interested. So, since I had to stop at the library anyway, I decided to pick up another Hamish Macbeth mystery. I finished it last night and, overall, I have to say I enjoyed it.

I was a little concerned when Macbeth uncovered Mrs. Gillepsie's secret relatively early. This is because, normally, if the motive is obvious, the killer is too. However, that turned out not to be the case this time around and the mystery ended up being a good one.

I think the thing that made this mystery interesting was the long list of suspects, including a battered husband, an angry step daughter and multiple blackmailing victims. And, while the latter seemed like the most likely suspects, they were so reluctant to admit they were victims, it was difficult to figure out which would have a secret dark enough to justify wanting to murder someone.

As is often the case with books in this series, the various side stories were just as entertaining as the actual mystery. I especially loved the ongoing war between two of Macbeth's supervisors and the way he helped out one of the locals by staging a fake village-wide rebellion.

I did think the ending of this book was a little dragged out, especially considering the murderer was caught a few chapters earlier. But, I will admit, Macbeth surviving not one but three separate attempts on his life did prove to be entertaining, especially when Macbeth wrongfully imprisons a potential love interest because of his paranoia.

Final Opinion: This turned out to be an entertaining murder mystery with plenty of potential suspects and a few surprise twists toward the end. I would recommend the book as a result.