October 23, 2019
Synopsis: Even though the rest of Lochdubh thinks the elderly Mrs. Margaret Gentle is a kind and generous woman, Constable Hamish Macbeth believes differently. And, when Mrs. Gentle tells stories about his laziness to his superiors, resulting in his beloved police station possibly being closed, it only strengthens his negative opinion of her.
When Mrs. Gentle's Turkish maid, Ayesha, comes to him because she has been fired and faces deportation, Macbeth, wanting to help her and believing it will save his police station, offers to enter a sham marriage with her. But, when both Ayesha and Mrs. Gentle are both found murdered, the would-be groom instead finds himself hunting down yet another killer. 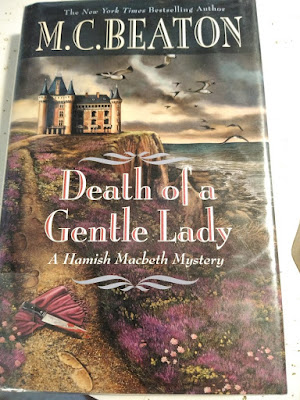 Review: One of the things that really stands out for me when it comes to the Hamish Macbeth mystery series is, so far at least, there have been quite a few books that I've enjoyed so much, I had a hard time putting them down. This book fell into that category.

The thing I found I loved about this mystery was the way it ended up evolving into something more complex than it first seemed. At first, it seemed like Mrs. Gentle murdered her maid and was then murdered herself, likely by a member of her own family. However, as more details about Ayesha's past emerge and it becomes apparent she wasn't as innocent as she let on, it opened up many more possibilities. As a result of this, it was very possible the two murders had nothing in common.

I also liked how there were a variety of potential suspects in this book. Some of them were somewhat obvious, like Mrs. Gentle's family members and a couple strangers staying at the hotel. But, I also found myself questioning the Russian detective that was involved with the case and wondering if maybe she wasn't who she was claiming to be. Ultimately, I did correctly guess at the killer but, because of what I said above about Ayesha's past, I did also have some difficulty figuring out the motive.

The various attempts on Hamish's life also made things cloudy, mostly because the killer used such a wide range of methods. One minute, the killer is trying to kill him using something cartoonish, like a string tied across a staircase. The next, he's nearly blown up by a professionally-made bomb. This, again, made me wonder if there was just the one killer or if there was more than one.

As is always the case with books in this series, I also found myself amused by the various non-murder subplots, especially the ones centered around Hamish's love life, which included him desiring two women who didn't seem to want him, being pursued by two others that he had no interest in and being accused of having AIDS. Between those things and the attempts to shut down his police station, it was hard not to feel a bit sorry for him, even as he was using his Highland instincts to solve the case.

Final Opinion: This was an entertaining book that I enjoyed reading to the point I couldn't put it down. I would recommend taking the time to read it.