Book Review: Never Have Your Dog Stuffed and Other Things I've Learned by Alan Alda (2006)

September 05, 2019
Synopsis: Actor Alan Alda's autobiography discusses his growing up with a famous but not-so-rich father and a mother with mental health issues as well as his life as a struggling actor before landing his role on M*A*S*H and becoming a success. 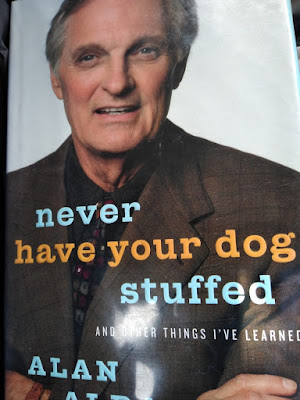 Review: I decided to change things up a bit the last time I was at the library and, in addition to my normal murder mystery, visited the biography/autobiography section. I'm a big fan of M*A*S*H (the TV show, the movie and the book) and figured this book would be a good one to start with.

As it turns out, the book was nothing like what I was expecting it to be. Given Alda's comedy background, I figured I'd be laughing out loud every few minutes. But, that didn't turn out to be the case. However, despite that, I found I had a hard time putting the book down.

If you buy this book thinking Alda is going to give you a detailed behind-the-scenes look at the M*A*S*H TV series, you'll be very disappointed. He barely even mentions the show, dedicating only a couple chapters to it. Instead, the book focuses more on his family life and early struggles, which I realized was a much more interesting read.

The way he talks about his mother and her mental health problems is something that really caught my attention. At first, her paranoia seemed almost comical. Then I realized this wasn't a comedy and that really happened to her, I found myself feeling really bad, both for her and for the family members who had to deal with her mental instability at a time when it was something to be embarrassed about.

In fact, as I read about his childhood, which included everything from his mother's issues to him traveling with his dad's Vaudeville act, hanging out with the strippers and never having a stable home life, it made me wonder just how he managed to grow up halfway normal.

I also found I enjoyed reading about his early struggles as a actor. Individually, the stories were kind of funny, like him nearly choking to death on stage because of his costume and nearly being taken hostage by a pair of inmates while making a film (The Glass House) at a prison. Together, the stories were actually pretty inspirational, both because of the fact he overcame all of that and because of the way he managed to learn from those struggles and become a better actor. It's no wonder I had a hard time putting the book down.

Final Opinion: It wasn't what I was expecting it to be. But, it did turn out to be a great book that was worth taking the time to read whether you are a M*A*S*H fan or not.